I like to think because I have taken some time building out a series, almost like a brand, I achieve some visibility in the genre. In my Dareville series, in particular, I don't always focus on the same characters with each book - or genres, for that matter. The four major novels are contemporary with hetero couples, but there are shorts within the series that are M/M and F/F, and two shorts even have paranormal elements to them.

One other thing that makes the stories unique, and I do get chided on this, is that the stories aren't written in order. Ideas for some stories in the series just seem to come to me and I have to get them down in book form. If one tale falls out of sequence I do my best to alert readers as to whether or not they need to read anything else for continuity. Hopefully, though, I can get back into order soon.

2. What is your motivation and inspiration to keep writing series novels?

For one, I still love the characters. I still desire to ask "what if" and engage them in new conflicts and adventures. I like the idea, too, of introducing new people to the mix and seeing what develops. As a mystery reader, I enjoy series books but tend to burn out after a few titles, and I believe it's because I don't see much change in the characters I keep reading. I suppose I write the way I do while holding the mindset of a reader who wants variety.

3. Tell us more about your platform, and how you use it to stay connected to readers, other writers, and the publishing industry.

I work in social media, so I definitely know it's important to be active on Facebook and Twitter, as well as sites like Goodreads. Mainly, readers will find me on Twitter more often (@LeighEllwood) and are welcome to keep track.

I also try to blog regularly, lately about topics aside from writing. Just as I don't normally follow blogs that are endless promotional posts, I do my best to keep the conversation moving.

In addition to her many romance novels and stories, Leigh also writes the comic strip Ged's Gals, an internet exclusive feature, and writes non-erotic mysteries as L.K. Ellwood. Her work has also appeared on the Playgirl.com website. 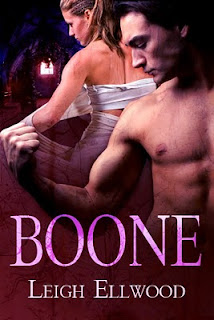 s next romance, BOONE, will be out in January from DLP Books.

Boone spent his life in the service of others, pining for the chance to be his own man, and to love the young woman who easily held his heart. Just as it appears his dreams would come true, one moment in time shatters his resolve, perhaps his desire to continue living.

Growing up, Iona only thought of Boone as a servant, somebody to push around and blame when things went wrong. Now, as she ponders succeeding her father as leader of their community, she sees the value in Boone. A marriage of convenience to Cozelle's best loved citizen may boost admiration for her come election time, but is Iona willing to sacrifice her heart for glory.

Furthermore, what would Boone say to learn that Iona was falling for him?

You can find Leigh on the internet:

Very interesting takes on writing a series and promotion. Thanks for sharing. I will definitely check out Leigh's work!

Thanks for participating Leigh!! Hope you're having fun!

Thanks for having me on the book tour!