Today's interview is with Kinley Baker!

I’m not sure what made me decide being a writer was a good idea. I just wanted to do it, before I even tried to write a book. My first major choice when I was looking at colleges was Creative Writing. After I started college I switched majors, tried a number of different classes, and ultimately settled on Creative Writing again. So I have a degree, but I wrote mostly creative nonfiction because of the classes I was involved in. I didn’t really understand the fiction professors who spoke of “showing vs. telling” and “voice”. But after college I started reading a lot. That led to frustration at waiting for books in series to come out. This led me to writing my own series so I wouldn’t lay awake at night wondering who was going to be Hawke’s heroine (from Nalini Singh’s Kiss of Snow). There was no moment when I decided I was going to try to get published. It was always just a goal and seemed like a natural progression. With all that said, looking back, I get what they were trying to teach me in college now. Lol. Just took me a while.

I write paranormal romance, fantasy romance, urban fantasy and my latest novella is a post-apocalyptic/futuristic romance. I guess that shows I just need a little magic, a little romance, and of course a happy ending. I’m having a blast with the futuristic romance, but I think that’s mostly because the characters are really fun.

This constantly changes for me. Right now, I can’t really read paranormal or fantasy. Something about the genre isn’t working for me, which is strange because it is by far my favorite genre and I’ve read hundreds of these types of novels. Recently, I’ve been escaping into Harlequin contemporary romances.

What is the most difficult part of the entire writing process for you? Queries, pitches, editing… etc.

Do I have to pick just one? Lol. I think every part of the process has its own challenges. Queries are hard because a lot rides on your ability to write a good one. Pitches in person to Editors are terrifying because I’m shy and have a bad habit of turning bright red when I’m nervous. Editing is tough because it’s a constantly evolving process and there’s always more to learn. Marketing and getting your name out there is difficult in a crowded market. I could go on, but to sum it up, writing isn’t easy. For me, loving romance makes it worth the difficulties.

Kinley Baker read her first romance novel at the age of thirteen and immediately fell in love with the hero and the genre. She lives with her husband and her dog, Joker, in the . As a firm supporter of all supernatural lifestyles, she writes fantasy romance, paranormal romance, and urban fantasy. You can find Kinley at www.kinleybaker.com. 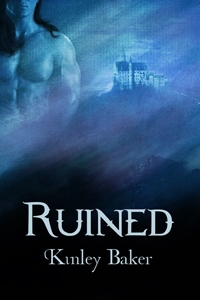 Jessa is one healing away from death. Under the thrall of her gift, the Court's Senior Healer risks giving her life in exchange for her patient's.

Vale is a rebel ruler. When his brother is killed, he's given the throne and the decree from the Court to produce an heir or lose his family's hold on the land--and his deceiving advisors aren't afraid to use murder as a weapon if their directive to stay away from the Senior Healer goes unheeded.

But Vale burns to possess Jessa. The heat between them leaves a wake of smoke, and even the powerful forces above want to bind them in a union that lasts forever. Vale taking another would be a betrayal neither could survive.

Their enemies fear a child born of such a powerful Healer and Warrior, but the true threat lies in the bond forged in shadows and fused in fire.

Great interview and answers! I'll be hanging on to a few of those tips!