Treating you to a double shot today. An interview and excerpt from author Jonathan Winn!

When you find yourself with a story that won't leave you alone, it's just easier to sit down and tell it rather than fight it.  Or at least that's what I've learned.  In fact, I remember watching Martuk unfold, chapter by chapter, and literally feeling the need to put fingers to keyboard and write.  As far as going "professional", I don't think I ever made that decision.  At some point it just made sense that this is what I do.

I don't write -- yet -- in one genre though I do write screenplays and plays as well.  My writing career actually started with a really bad screenplay -- since rewritten, thank goodness -- and a really good play and then moved from there to Martuk.

It might sound weird, but the most difficult part for me is deciding what to do next.  Not only do I have fully mapped out ideas for future books, I'm also juggling screenplays and plays and their various adaptations as well.  So, it becomes a question of, well, do I spend the next few weeks slamming out a first draft of this movie or rewritten the second draft of this play or logging in twenty or thirty thousand words on a book?  I think that's where I struggle the most.

There isn't a specific author out there I look at and say "yeah, that's what I want".  I believe for any author, it's important to focus on building your brand and then offer strong, quality work that supports and strengthens it.  And then don't screw with it!  If you readers are expecting X when they open your book, be sure to give them X (with a twist, of course) and not Y because if they get Y, chances are they'll close the book and not come back. 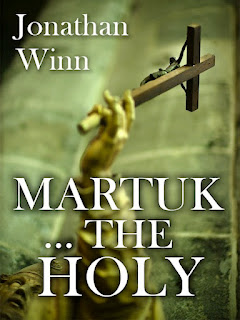 Excerpt:
“So much rage in you,” he whispered, looking again at the dying man struggling to breathe. “Just let it go. Let life, all that power, all that glory, go. Those riches. Let it all go. It’s at an end now, you silly, stupid old man. It’s ending. It’s over.”
The Elder opened his eyes and blinked, looking up at The Magician and then glancing at me, searching my face for a clue to who I was.
I considered assisting him, the Elder. Helping him on his journey. But this sliver of inhumanity growing in strength reveled in his struggle.
Not the gloating celebration of the Magician. No, it was a more quiet appreciation of the Elder's pain.
The sweat, the shivers. The stained bedding. The tears and the shallow breaths slowing as he gulped and gasped. The obvious regret.
This battle between Light and Dark as the Veil tugged and pulled and clutched at his sleeve. Wrapped its cold fingers around his bony neck, drawing him near.
But The Elder was weak. Killing him would be too easy. The Magician, though ... ah, he was so close. Within reach. I could easily snap his neck. Lift him into the air and throw him against the wall, his bones breaking against the polished stone. I could almost taste it, this impending victory, the satiating of this blood lust. It was on my tongue, my fingers tingling, my muscles readying for battle.
“You enjoy killing, don’t you?” The Magician asked, his eyes fixed on The Elder. “All those innocents. Those broken  bodies. All that poison. Those bones cracked and splintered and ground into dust, into the stone.
"You felt power as you watched them struggle, their tongues swelling black, their eyes weeping. As they tore at their flesh. Power when you watched them breathe their last. Happiness. Satisfaction. You liked it.
"Even now, the memory of it, of all that suffering flesh, those cries, their tears, it’s enjoyable for you, isn’t it?
"Killing is enjoyable.”
Yes, I thought, as I turned to him, the gleaming skull and his garishly painted face so close.
Killing is very enjoyable indeed.

Thank you so much for participating Jonathan!