This is just one girl's opinion....

As a writer, I'm constantly worried about how I will end a story. My personal preference is usually to have a happy ending. No, no not THAT kind! Silly.

Not every character can have a happy ending, I understand, but the main characters, in my stories, usually get one. 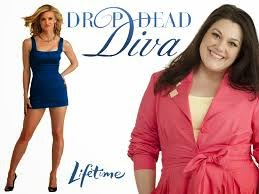 One day, back in the summer of 2009, Lifetime started promoting a show about a super cute, thin, blonde model who dies, goes to Heaven, hits "RETURN" and ends up in the body of a super cute, plus-sized, brunette lawyer. It was billed as a romantic comedy/drama

A chubby girl as the protagonist?

This was before Melissa McCarthy got her show. Before Precious. Before Rebel Wilson. She wasn't the best friend. She wasn't the frenemy. She was the MAIN STAR of the show.

Hmm. Okay, I thought. I should check this out. I can relate, I'm chubby, too!

After the first episode, I was hooked.

"Deb" the thin blonde model was a bit shallow, kinda annoying, but she had a really awesome finance named Grayson who loved her for who she was despite her faults. You know, like real love. She dies on her way to an audition.

"Jane" the plus-sized lawyer was brilliant, had very little fashion sense, but a very big heart. She gets shot in the first episode while working at her law firm.

Deb hits return, ends up in Jane's body and learns that Grayson got hired by Jane's law firm. Awkward!

So for six season, we watched Jane/Deb learn to accept her new body, become a much nicer person, and struggle with her very strong feelings for Grayson...all the while being unable to tell him that her soul is really Deb's.

I enjoyed this show for multiple reasons. While it did cover health and weight issues, it didn't pander to either group, rather helped you accept that people will always come in different shapes, sizes, colors, and the like. The law cases were always awesome and not the usual type you'd fine on network television. They also, slowly, allowed Grayson to fall in love with Jane for who she was, even if parts of her personality reminded him of Deb.

Instead of giving us a Jane & Grayson happy ending which 90% of the viewers wanted and were expecting, they killed off Grayson four episodes before the finale, stuck HIM in another body--a guy on death row, no less named Ian, and then gave them a happy ever after, sorta.

As a writer, I can only think of two reason for them to do this. 1. Jane had great chemistry with Ian (new Grayson) or B. They thought they were being clever. They were wrong.

The moment Grayson ended up in a new body, I was kinda done with the show. I knew Jane would have no issue, no conflict, and no problem hooking up with Ian/Grayson so why bother doing it? All it did was create stupid drama between Jane and all her friends, which in turn screwed up the cutest wedding story line of the entire show between Stacey and Owen.

I really hate it when the last few episodes of a show ruin the entire series for me, but it did.

I won't be doing a rewatch of this one, which makes me sad. It was nice to see a chubby girl as the main focus of a TV and not be the comic relief-even if she was funny.

Did you watch? What did you think? What show, besides LOST, did you hate because of the final episodes?