#WonderWoman irked me a little. Sorry!

My superhero obsession started early and led to my overall Sci-Fi geekdom.

I was born in 1974. Wonder Woman came on TV in '75. I don't recall watching any television shows before '79 or so, so I basically missed the Lynda Carter show. I never saw reruns either. I didn't, however, miss reruns of Batman (Adam West), Hulk, or the first Superman movie on cable in 1980 or '81 or the plethora of cartoons on like Super Friends. I loved them all! 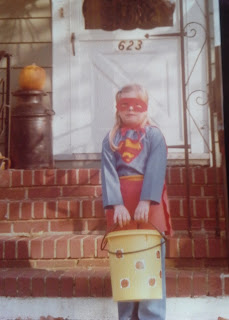 In the first grade, the gifted and talented asked me what I wanted to be when I grew up. I said Superman. They laughed me off and of course, I didn't get in the G&T, but maybe I would have if they asked me why.

To a six-year-old Superman is the coolest thing you've ever seen. He can fly. He's indestructible. He's dreamy with big blue eyes. Ahem, I mean he's honest and truthful and never gets angry. He helps people and never asks for a reward. If a six-year-old said they wanted to be all that when they grew up, your adult mouth would probably drop to the floor. I don't remember what I would have said if they had actually taken the time to ask. Something like: I want to save people and fly, knowing the type of kid I was.

In my teenage years, the darker versions of Batman captured my attention. He was the complete opposite of Superman. Dark and brooding, tortured and alone. Had a tragedy in his past that haunted him but he still wanted to be good, do good. I completely related.

I turned my attention to other Scifi and Fantasy after High School, but always kept up with the Movies or TV shows. Since none of them were Wonder Woman, I was never a fan of Wonder Woman.

Fast Forward to last year. Stay with me, it's worth it.

I fully admit I missed Batman: The Animated Series when it first came out in the '90s. I was in my 20s and into anime and Star Wars and Star Trek at the time. I remedied that last year and watched it, Superman, Justice League and Young Justice over the summer.

I became a Wonder Woman fan.

I liked her backstory in JL. I like how she came to be on the team. I loved how badass she was and that she went toe to toe with every man on screen, including Superman. I watched her DC animated movie and rewatched most of the others, loved her even more.

When she showed up in Batman Vs Superman, I thought she was the best thing in the entire movie despite the color drain on her outfit. She's badass. She LOOKS like Wonder Woman, tall, athletic, and yeah, she's super hot. That never hurts. I was thrilled when they announced the movie and even more stoked after watching the trailer.

So, onto the movie.

I liked the movie but it irked me. Here's why:

I wasn't a fan of the Harry Potter animation in the beginning and thought they underused both young and teenaged Diana. I wanted MORE of that. I loved the Amazons. I wanted more of that too.

Steve arrives. Admittedly, I'd follow Chris Pine and his baby blue eyes to the ends of the universe if he asked me, and I'm glad Diana defied her mother to go help fight the war, but I wasn't completely on board with the reasons. I get that they needed to get her off the island and start the movie, only it didn't start. We have her trying on clothes, funny, but really? Showing her kicking once and ripping a skirt then coming out the way she did with the shield and sword was funny enough without a pretty woman moment. She's a freaking SUPERHERO!

Then, of course, we have to show the misogyny of the time with military men in power and awkward introductions. *Yawn*

Let's throw in some action that harken back to SUPERMAN. Okay, it was cute and Chris Pine's reactions are priceless. I'll forgive it.

Now let's go meet some more guys to help her along her hero's journey.

Finally, we get to it. No, Diana, you can't. Screw you, I'm helping and she does. I was in that moment with her, I even teared up a little seeing her alone on that battlefield holding back the fire. Good shit.

Then we get to town and Wonder Woman goes to town. Easily the best action piece of the movie. However, it was an easy win if you really think about it compared to the Big Bad at the end.

Plot plot plot, we get to what she thinks is the finale. Good fight, a little harder. But we all knew it wasn't the Big Bad, right? Did you think she'd be fighting Doctor Posion? So did I, another disappointment, but neat reveal, I didn't see Remus coming.

Here is where she starts to unlock her super powers. Um, really? Okay.

Steve has to help save the day too and finds Diana, says something she can't hear (because deus ex machina), gives her the watch, see ya!

Fight, fight, fight, more powers unlocking, but Big Bad isn't having it pins down our hero. NO! How will she win?

Steve goes bye-bye. (What is it with Steves and planes and sacrifices? And thanks for stealing some of the thunder there buddy.)

She's debating being evil and hurting the woman? Then she remember-hears what Steve said. That's what I needed to hear! Love will save the day. DIE!

Batman - "I lost my mother and father. Watched them die horribly before my eyes. I trained my mind and body for years, turning it into a weapon. When I began fighting crime, I was already considered a superhero."

Superman - "Oh yeah? My entire planet blew up. I was a refugee and by sheer luck found a home in America where two people helped raise me to be kind, honest, truthful, and help whenever I can and only used these powers for good. I spent years in the Fortress of Solitude honing my skills and when I introduced myself to the world, I instantly became a superhero."

Wonder Woman - "I don't really have a sad backstory here other than being "made of clay", you don't see me really training or getting stronger, I have to do that just to get to the end of my movie. And how will I defeat my enemies? Love dude. The power of love."

You'll say this whole movie is her backstory! Yes, that's mostly true. Her full strength is unlocked by the end of the movie and she definitely grew as a person but I wouldn't have done it this way.

Fish out of water stuff was cute, but unnecessary, having her spend that time learning about the "outside world" would have been more compelling or you know, training a bit more on the island? Or more moments like the secretary thing. Why do the men talk to women like this?  You've seen what I can do, why are you telling me I can't go there? She didn't really struggle with fighting until the very end of the movie, everything else was too easy. She didn't stumble and learn from any mistakes. She was told no and did it anyway. Cool, but that's just lame.

Basically, they powered down Wonder Woman to power her up for the movie and that's kinda shitty.

I wish they would have used a different timeframe to introduce her character. I understand what the writers and directors were trying to do with WWI being the first industrial war and all that and I'm glad Doctor Poison had that sniffer drug to give Wonder Woman a nice mini-boss fight, I just would have preferred her more like the cartoon version.

I wonder (ha!) what I would be like if I'd seen a Wonder Woman movie like the Superman movie first. Maybe I would have said "Wonder Woman is the coolest thing you've ever seen. She can fly. She's indestructible. She's pretty but doesn't rely on it. She helps people and never asks for a reward." Because that's who Wonder Woman is, too.

So, while I did like the movie and love, love, love Gal as Wonder Woman, she needed a better story. I don't forsee much story in the Justice League, but I'll see it anyway. I'm a Superhero fan.

Did you see the movie? What did you think? Am I being too hard on it?
Posted by Jenn Nixon

Nice article as well as whole site.Thanks for sharing.