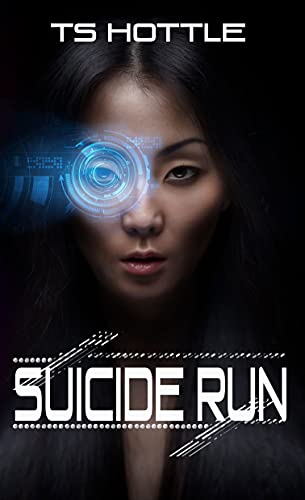 Life on Amargosa was supposed to be quiet for Cui Yun, better known by her call sign Suicide.

But when a baby is dropped on her doorstep, the mother's disappearance leads her across the galaxy to a world of Neanderthals, a  devoted colony that worships Marilyn Monroe as a goddess, and a planet still in a post-apocalypse and rife with monster plants.

She and her protege will find themselves above the galactic plain facing down an enemy that wants control of human evolution itself.

Get Your Copy Now!

The squat two-story shuttle surprised Suicide as it approached. Short, with a wide lower fuselage, it normally invoked fear in enemy troops. It meant another such craft had already disgorged a squad of Marines from orbit, and Navy or Border Guard Spec Force troopers waited inside to come swarming out. She knew. She had flown one of these during the liberation. The Gelt remaining on Amargosa had told her they did not like that many had been converted to civilian use.

She expected her visitor, however, to arrive by barrow, a ground vehicle favored by most of Amargosa’s rural inhabitants with two wheels in the front, a pair of treads in the back, and a long open bed behind the cab. Her friend had commandeered a military one for himself when the occupation ended, calling it, as so many of the liberators, resistance fighters, and stranded Gelt did, compensation for the war.

He normally came by barrow, the farm vehicle bouncing along the still-unpaved roads north of the Townships. That, or he would come by foot if he were in the Townships themselves. The shuttle, a type dubbed a “Falcon” by the Navy, told her he had been in one of the cities. Which meant he had been called to duty.

The Falcon bore the markings of the Amargosan Colonial Guard. Only lettering on the craft’s belly, “Property of Compact Navy,” gave any hint that it actually belonged to the Compact proper, not Amargosa. After two years, Suicide still did not know if she lived in the Compact or not. That civilian Gelt remained on the planet after their kind had trampled it for a year still surprised her, never mind Amargosa’s status in political limbo.

The craft settled in a wide section of thin, dry grass, its antigravs and maneuvering jets kicking up dust. Given the fuel a planetary hop would take, Suicide guessed her friend had been in the capital or had been shuttling to and from the surface. So much for bot wrangling.

The assault hatch fell open in the back, becoming a ramp as it lowered to the ground. Instead of a dozen hyped-up soldiers with KR-27 rifles lit up and racked, a single euro male strolled out wearing a civilian flight suit.

So, he’s Amargosa this time¸ she thought, not Navy. And not Hanar. This last, a polity started almost as an apology for a Gelt invasion elsewhere, had been making overtures to Amargosa to join with them. She had seen her friend in their uniform and in that of the Compact Navy since they both “retired” to this place.

He had been busy, a couple of days’ stubble on his chin, his already messy hair ruffled by wind, and matted with sweat. He had bags under his eyes, but he also walked with a bounce Suicide envied. Even rejuve could not restore that spring people had in their step before their twenty-fifth birthdays. Aging may have been stalled, even reversed in some cases, but it still took its toll in certain ways, just to remind humans that amortal still meant mortal.

Her friend needed rejuve. Never mind that he would not turn twenty for a few more months. The war and its aftereffects had changed him. The illusion of greater age that had served him as a ruse in his younger days now displayed the weight the occupation still had on him. He walked like a man whose burdens refused to leave.

The word “mom” brought a smile to her face, despite herself. Yes, it was a joke between them, but the word struck a nerve with her every time. This man was her son, if only by choice, and with no legal declaration. “JT, if I were your mother, you would have been spanked as a child.”

He took a pair of shades out of his breast pocket and put them on. The name “Lt. J.T. Austin” stood out on the pocket. “I’m glad I was never spanked until I was an adult.” He frowned. “Not that I’ve had much opportunity these days. You heard?”

“Governor Best? Yes.” She gestured toward the Falcon, the name Goldeneye stenciled on the side. “Yours?”

“The Colony’s,” said Austin. “Been flying over the pole the last couple of days, trying to rally some lycanth packs in case very bad things go down, and we’re on our own again.”

“What about our gray friends?” she said, referring to the Gelt. “Nervous? Hopeful?”

“They’re a bunch of scared settlers brought here against their will,” said Austin. “They’re just happy we’re not shooting them, and the lycanths aren’t trying to eat them. Well, the intelligent ones. We all need a shotgun and several boxes of shells to hold off the wild ones.” He glanced toward the hut. “You said you needed me. I flew straight here from my last run instead of to the farm. What’s happened?”

As if on cue, a baby’s cry sounded from the hut.

“You know what the best part about considering you my son is?” said Suicide.

He gave her a half-smile. “It’s not real, and I was practically an adult when we met?” He gestured toward the house. “Lead the way.”

Enjoyed reading the article above , really explains everything in detail, the article is very interesting and effective. Thank you and good luck for the upcoming articles. disadvantages of recurring deposit account