Today's blogger is M. Flagg. Ms. Flagg was in my first ever critique group and boy did we have a blast. Sadly the group faded out due to travel issues, but we've been buddies ever since!
Enjoy & Comment!
Why did you start writing and when did you decide to go professional?
My trip into writing is somewhat interesting. I had just finished a second masters in educational leadership which required multiple weekly journals, a two-year action research project/thesis, and weekend classes—while teaching full time and going through a very difficult divorce. After graduation, I was mentally drained. One could say I didn’t have the brain cells left to analyze another 100 page reading assignment ever again!
To be honest, I fell into a depression. I think my family’s concern for me started to spin out of control. Then my son said, “Why don’t you write a story?” Okay. Nothing at all resembling reality sounded tempting. After we kicked around some ideas, I replied like an excited nut job, “I know! I’ll redeem a vampire.”
And that was that. I thought, write ten pages and get it out of your system. But the idea turned into my debut novel, Retribution! Not knowing about RWA, NJRW, or that any such writers group existed, I simply wrote from my heart and then struggled through the edit process. Three novels later, paying more attention to POV and sentence structure, my third novel will be released in 2011. I still feel totally blessed that my son cared enough to want to see me happy (and sane) again. In short, writing my vampire’s drama became a healing experience for this author.
Do you write in more than one genre? Which ones and which do you like the best?
Besides Paranormal? Is there anything else!? But yes. I’ve published a sweet romance short called Hollow Hearts. It’s a free read at Long and Short Reviews and it can be accessed on my website. Someday, I hope to turn it into a full-length novel because I really enjoyed creating Agatha and Darby. But right now, I’ve started a YA fantasy. Well that answer was all over the place, right?
As for which I like best, anything paranormal is such fun to write. The world an author creates can mimic reality or stray as far as any inter-dimensional portal can take you. Although many genres roll around in my head, somehow paranormal is where I end up. Sorry, too much info, right?
However, I like to read various genres. Except horror. Really. The very vivid imagination keeps me up at night and at my age, I need the sleep.
Do you read other author’s books when you’re writing? If so, do you read the same genre or something different?
No. I can’t read another author’s work while I’m writing. The last thing I need is someone else’s voice in my head! And absolutely never read a paranormal while writing one. I’ll tackle small things like articles about writing or I’ll visit a few fabulous blogs (like yours), but never a book or short story during the creation process. The only ‘other reading’ I can handle is the newspaper. And sometimes, what’s in it is scarier than a vampire.
Also, when writing I won’t listen to music. I know some writers can and often find inspiration in song lyrics and such. Being a musician, I hear music differently than someone who doesn't know what a Cmsus9 is. It’s like dancing and painting a portrait simultaneously. Total silence reigns when my fingers are flying over the laptop keyboard J
So now, The Champion Chronicles Trilogy is finished and His Soul to Keep has a July 2011 release date. I can relax and listen to my favorite recording artists again.
Author's Biography: Named a Distinguished Music Educator by  in 2009, M. Flagg is currently a school administrator. Blessings in her life are many, and she’s eternally grateful for her supportive children, RM and Kara, and a loving circle of family and friends.
Book Info:
The Champion Chronicles: Retribution! Consequences… His Soul to Keep
Romantic Times Book Reviews (September 2010)4 stars for Consequences… Compelling – A page turner. “Book Two of the Champion Chronicles is a really wild ride. This is a story about a different sort of vampire. Very enjoyable!”
Retribution! Review: “Intricate and epic… Flagg’s writing style varies from exquisite word choice and imagery in many descriptions to the simplistic in others situations. Fans of both urban fantasy and paranormal romance should find plenty to enjoy here.” Bitten by Books 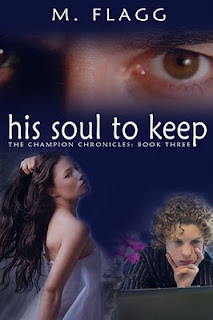 His Soul to Keep (coming in July):
Destiny is rewritten for Michael Malone, a mystically enhanced vampire, with an outcome so unexpected that everyone in his world is stunned—Michael most of all. Suddenly mortal, he faces challenges unlike any he has ever experienced.
Alana, his Guardian and soul mate, questions how the evil that lived within Michael was vanquished. Lukas, his human son, doesn’t trust his father’s heartbeat, and Michael himself has no answers.
The bonds of their love will face the greatest test of all when the ancient demon anchored within Michael for 317 years is discovered alive within an innocent human. Can Michael, Alana, and Lukas destroy the evil unleashed in order to give Michael his soul to keep?
You can find M. Flagg online:
Facebook: http://www.facebook.com/pages/M-Flagg/132093746689
Website: www.mflagg-author.com
Blog: http://paranormalpassion.blogspot.com
Posted by Jenn Nixon

Morning, Jenn!
Thanks for having me on your blog today. I'm reveling in the blooming lilacs outside my window, enjoying some down time today. I'll check back later!
Have a great day!
~ Mickey

Thanks for stopping by Mickey! Glad to have you. I love LILACS!!!

"Sadly the group faded out due to travel issues, but we've been buddies ever since!"

Hell yeah, we are!

You're so right, girlfriend! Thanks for stopping by, Kirsten. Keep on writing! ~ Mickey