My guest today is YA Author Christine Norris! I had the privilege of reviewing one of her earlier books Return to Zandria and we've been friends ever since!

Thanks for being here Christine!

Yes, always. I know some people think it's bad to do that, or they're afraid that whatever they're reading will seep into their work. But I find that reading while writing is a good way to 'refill my well' - when I'm all out of ideas or having a hard time, reading other people's words is a way to inspire myself. When I'm reading something really good, my fingers start to itch.

Believe it or not, writing first drafts. I wrestle the most with the whole process. I think I psych myself out over them, try to do too much. Once it's all written down, I'm Queen of Revision. I've got a good handle on how to write a query, no problem with pitches. But those first drafts are nerve-wracking!

I SO want to say JK Rowling, but I don't want to be predictable and boring. There are so many authors I admire, I don't know who I would want to be. I might pick Libba Bray, because she's so versatile and ridiculously talented. I think I'd like a career like that.

Author’s Biography: Christine Norris is the author of several works for children and adults, including the Library of Athena series and the Zandria duology. When she’s not out saving the world one story at a time, she is disguised as a mild mannered substitute teacher, mother, and wife. She cares for her family of one husband-creature, a son-animal, and two felines who function as Guardian of the Bathtub and Official Lap Warmer, respectively. She has also done several English adaptations of novels translated from other languages. She reached a new level of insanity by attending Southen Connecticut State University Graduate School’s Information and Library Science program, so that someday she, too, can be a real Librarian. She currently resides somewhere in southern New Jersey. 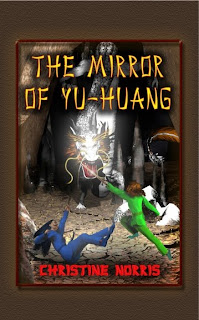 Book blurb: Megan’s dreams of a fun and relaxing Christmas holiday turn into a nightmare when the headmistress of her school strong-arms her father into hosting a huge New Year’s ball for the Chinese ambassador. She’s been unlucky with houseguests in the past—like the one who died.

Then Megan receives a gift, one that shows someone knows not only about the Library of Athena but of her connection to it. Who made the mysterious phone call in the study? Who stabbed Xu Ping? Megan thinks she knows, but before she can confirm her suspicions the Library is invaded, and only the Librarian stop the invader from threatening the world.

So glad to have you today, Christine!! Keep writing fabulously!

Midwifery assignment writing service learners have an advantage of hiring the best midwifery research paper help writer that is familiar with midwifery coursework writing services for their Midwifery Writing Services.