Joseph Marquand didn't want to go back, he really didn't, but duty called and curiosity beckoned, and besides, it's not like his nights could get any worse.  A werewolf attack on the Moon itself was something of a novelty, especially for Earth's greatest werewolf hunter, and if he could lay a few of his own unquiet ghosts to rest at the same time...Well, one ghost.  Cynthia's ghost.  The reason he'd quit space.


The people of Coventry Base definitely didn't want him there.  Except for Candace, who was definitely in the minority.  They'd found shelter there for a reason, and they were more afraid of the werewolf hunter than they would ever be of a werewolf.


Then the nightmares began, and the wolves of Coventry Base found that they were haunted by far more than just their curse.  They were being haunted by Marquand's curse as well.  The werewolf hunter had become the werewolves' only hope for salvation, but Marquand's only hope for salvation was in one woman with no hope, and another who didn't even know she existed.
…but the werewolves don't know that! 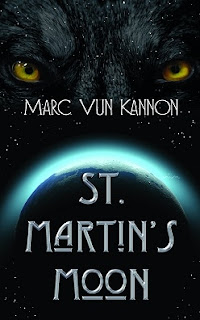 The game was afoot. The hunters hunted, the prey prayed.
Joseph Marquand ran. It was his turn. His partners waited patiently at the covert, waiting for that which they hunted to arrive, under his gentle guidance. It would not do to disappoint them.
There! The church sign, some feast day for a saint he'd never heard of, which made it perfect to remember his directions. Turn right, he thought with grim humor, and go straight. Provided their prey obliged him by going the same way, of course. Here comes the hard part.
The Runner on the team carried no weapon, nothing to slow him. Strategy ruled this night, rather than physical prowess. In this case, little glass spheres, filled with something pheromonal and potent, would keep the prey off guard and focused. One thing the Runner needed, he had to have balls. He used them now, hurling them there–and there. His prey ran faster. So did he.
At last, the home stretch. A straight alley, no windows, no ladders, nothing but the special red carpet laid out for him, and his men just beyond, in the…tangled wreckage?
Something very large and very nasty rose from the ruins of the covert. He couldn't see it clearly, didn't need to, didn't want to. His memory could fill in the details the light of the full moon mercifully hid.
Oh, Christ, two of them!
One of him in between, with no weapon.
The one ahead leapt straight up and out, landing heavily right in Marquand's path, jaws open to catch the prey running straight into them. The creature behind howled its anger, its prey being usurped by another. The one in front looked up at the greater threat.
They weren't social creatures. Nice to know, but it sucked to be the one to find out. Marquand's knees buckled.
He dove forward, right between the legs of the creature before him, onto the mat laid out for his return. Wet and slick, he slid right down into the ruined covert, even as the front beast bent double looking for its prey.
Marquand grabbed one of the fallen weapons and shot, hitting it right in the butt. Even as the beast fell, writhing, the other one leapt over it and–
Tripped. It slid forward, unprepared and unable to keep its balance on the wet mat. Marquand watched it come towards him, jaws open, as he frantically chambered a second shell and tried to get the barrel pointing in the right direction. The beast helped, catching the barrel in its mouth and swallowing it, right up to the crossbar that prevented it from getting any further. Marquand and his men couldn't chance getting bitten.
He fired.
The beast slid backward under the force of the shot, until it ran into the body of its former rival, now inert. Neither one got up.
Marquand didn't wait. If they were going to get up they would have by now. His men had to be seen to. Now. If any had survived, survival being loosely defined–well, he hated most parts of the job, the Sad Duty most of all. Its only saving grace was that if it had to be done at all, it had to be done quickly.
No. No survivors. Thank God.
What a world, what a life, what a thing to be thankful for. He despised himself in that moment. What he'd become. So much lost. "I need a vacation." Department policy agreed with him, but he didn't really, and he knew it.
He knew what he needed, what he would never have again. He'd just have to fake it. Like he always did.
St. Martin's Moon by Marc Vun Kannon
The Moon is haunted, but the werewolves don't know that!
http://www.marcvunkannon.com
http://authorguy.wordpress.com
Posted by Jenn Nixon

Thanks for stopping by Marc, glad to have you!