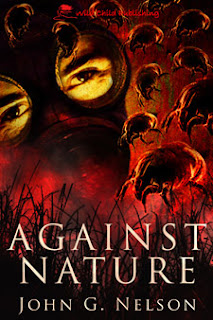 The is ground-zero for a mysterious global pandemic. The disease is highly infectious and kills it’s victims within two weeks of exposure. It’s neither bacteria nor a virus and all traditional treatment regimens have failed.
Serena Salus, a radical scientist, discovers the organism is an extraterrestrial dust mite brought to earth by a shuttle astronaut. The government contends it’s a genetically-engineered organism created on earth by enemies of freedom.
Dr. Salus uncovers a vile plan for distributing her experimental vaccine and finds herself in a deadly confrontation with powerful forces that’ll stop at nothing to control the distribution of her vaccine.

Excerpt:
Adam Spinoza’s head pounded. Large does of aspirin and Tylenol did nothing to relieve the pain. He’d been in  three weeks when the flu hit. Spinoza, an American ex-patriot, worked as an envoy for the nationalized Ecuadorian plastics cooperative and had been in  lobbying  retailers.
St. Francis Community Hospital looked like a military compound. Large orange barricades blocked the entrance and several respirator-clad cops directed the human flow toward a tent set up on the hospital grounds. An old woman struggled with her walker and oxygen canister and eked toward the triage area.
“Do you need any help ma’am?” Adam asked the old woman.
“Get away from me,” she demanded. Adam stepped back and proceeded along the roped path toward a nurse covered from head to toe in light blue scrubs, surgical cap, gloves and boots.
“What’s your problem?” The nurse barked. From behind her mask and plastic face shield, Adam noticed her tired brown eyes.
“I’ve had an intense headache for the past three days,” Adam said.
“Do you have a history of migraines, tension or cluster headaches?” The nurse showed little compassion.
“No, I have no history of headaches.”
“What’s your full name and social security number,” the nurse asked. A younger woman in green scrubs jotted down Adam’s personal details on a clip board.
“Let me see your hand, we need to do a screening finger stick,” the nurse said.
“A what?” The nurse grabbed his wrist and rubbed an alcohol pad on his index finger and pricked it. She squeezed out a drop of blood and dabbed it onto a test strip. It turned blue.
“We’ve got another positive,” she yelled.
“Positive what?” Adam grabbed the test strip from the nurse. “What is this, I came here for something for a headache.”
“You have Suspicious Flu; you’ll have to leave immediately. There is nothing we can do for you,” the nurse said. Adam saw the fear in her eyes. Two large men in olive drab “space-suits” approached him.
“Sir, you need to leave the premises,” one of the burly men said. The other positioned himself behind Adam.
“You need to stay at home. Do not leave. You are highly contagious,” the man said. The other man pushed Adam forward.
“And don’t come back,” he pushed a little harder.
Adam walked across the hospital’s front lawn and onto the city sidewalk. A few hundred feet down the street he stopped at the public bus stop. Sitting on the bench, he looked at the chemical-blue dotted test strip and his hands shook and a wave of hysteria consumed him. He cried uncontrollably for half an hour. The bus, which normally ran every twelve minutes, never came.
Visit John online:  http://johngnelson.blogspot.com/
Posted by Jenn Nixon

Thank you for participating John! Love the excerpt!