Today's Teaser is from Dawne Prochilo!

Book Blurb:
How many of us wish we could turn back the clock? Go back to one specific time that would change our lives forever and it would be exactly how we wanted it.


Brynn Saunders has wished that for over two decades and while she can't change her life, a strange twist of fate is giving her a second chance at her one true love. 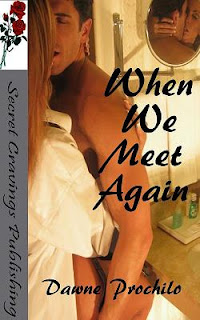 
When We Meet Again
Dawne Prochilo
When he got in the truck he asked, “So, where to?”
“Hmmm,” she thought, nibbling on her lower lip. “Not much to do around here.”
He started the truck, “Well, we’ll find something.”
As he pulled out of the parking lot, Brynn remembered a park on the other side of the town and directed Ethan where to go. It was dark and the park was empty, so they parked near the entrance.
He removed his seatbelt. She followed suit and readjusted herself to be more comfortable. She turned to face him and sat with her legs bent beneath her.
She could still make out the contour of his face even though it was dark. Even though she could barely see his eyes, she knew they were gazing at her. She shifted a little and Ethan leaned in and kissed her. He placed his hand under her cheek and his fingers entwined with her hair at the nape of her neck. He pulled her closer to him and into the heated moment.
His mouth was so sensual she could’ve stayed here forever. When his tongue slipped into her mouth, she inhaled with exhilaration. She met each of his tongue strokes with a feverish desire of her own tongue.
She leaned over the center console of the front seat and wrapped her arms around his neck. The kisses were becoming so deep and intense that before Brynn knew it, she was sitting on his lap in the front seat. She needed to be closer. His arms wrapped around her waist and she was running her fingers through his hair.
“You can’t be very comfortable,” he said when their lips finally parted.
“I’m fine,” she said breathlessly and swallowed.
“Are you sure?” he asked, trying to reposition to give her more room. He put his arm under her bent knees that were dangling over the console into the passenger seat. He tried to pull her body more onto his lap.
“I’m fine, really,” she said, smiling in the darkness.“What are we doing?” he asked her. “Are we going to stay here, park and make out all night?”
Just then a vehicle coming up the street shined its lights on them. She squinted at the bright intrusion.
“Not exactly a lot of privacy here,” he said holding his free hand up to shield the car’s lights from her vision.
“So I’ve noticed,” she smiled. “Well, I guess it depends on how much privacy we need.”
She kept running her fingers through his hair and he laid his head back on the headrest. He shut his eyes enjoying the tranquil moment and arousing caress.
“Oh, babe, that feels so good,” he moaned and began lovingly stroking his hands over her waist. His hand was under her cotton shirt, touching her flesh. It felt so warm and smooth; Ethan thought he’d lose himself in her softness.
“I’ve been thinking about this night and moment forever,” she admitted and stopped touching his hair. “It’s almost surreal.”
He raised his head and looked at her. She appeared so innocent, with a hint of alluring charm. Her presence captivated him.
For a moment, Ethan was twenty-four years younger and they were up on Hannaford Hill. Her soft body and sexuality hadn’t changed, it became more enhanced, and he felt his own enhancement growing in his jeans. He shifted again.
Posted by Jenn Nixon

Thanks for participating Dawne, wonderful to have you today!