A long time ago, in a galaxy far far...oh, sorry, wrong franchise... 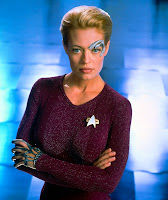 Many of you know Jeri Ryan as Seven of Nine from Star Trek Voyager. Lots of fans agree, she saved the show.

I, as many of you know, have a sick fascination with Time Travel, so some may be surprised to know I first saw her in Time Trax, a show from the mid 90's about a man who goes back in time to catch criminals. I happened to love the show but it didn't last long. Imagine my surprise when she showed up as a Borg on one of my other favorite shows in 2001!

I recently went back (Thank you Netflix!) and watched all the Seven related episodes again. Aside from being super hot, Seven was a character I instantly loved. I felt sorry for what the Borg put her through, wondered if she could actually become Human again, and enjoyed the early interactions between her and the crew. I thought her relationship with Janeway was awesome, they filled a familial void  in each other, and when they butted heads, man was it good. When Seven and the Doctor (not Who--though that would be an awesome crossover!) became friends, it gave us some of the best and funniest moments of the show.

It's taken a while, but the strong, kick ass girl character is everywhere these days, and Jeri Ryan has played a few of them since Voyager. (And I thought it was hilarious seeing Jeri Ryan in Warehouse 13 followed by Kate Mulgrew a couple weeks later!) Anyway, Seven was a strong, tough, female character, who had an amazing journey and story arch. Something, as a writer, I truly appreciate.

When I decided to create another character for my Online Star Trek group, I took two of my favorite characters at the time, Seven and Data from TNG, and used them as a template for Tiva Boon. Tiva doesn't look like either of them but aspects of their character's personalities can be seen if one pays careful attention. The Tiva character eventually took on a life of her own, threatened to keep me awake for the rest of my life if I didn't write her story, which I did, turning her story into a three-part 400K epic. Talk about a tough character, huh?

Well, Tiva is still one of my favorite characters, even if I can't get her story published, and it goes to show you that inspiration can be anywhere!

Have you ever used an established character as inspiration?

Who is your favorite fictional character on TV right now?
Posted by Jenn Nixon

I loved Seven too. Fantastic character. Right now, I adore River Song from Doctor Who. So much spunk and mystery! She kicks butt. I love her.