Even if you don’t describe it explicitly, every story has a context. A novel is its own world. Living, breathing, changing.

You must build this world. The world in the novel goes beyond descriptions of rooms and landscapes. It includes fashion, history, outlook and mood.

Physical surroundings can have a psychological influence. The beach always makes me happy. I have a room in my house that I and most people find very soothing. I usually nap in that room.

A setting can have an impact on characters. I’ve talked about the conflict arising from the setting, but how does your setting make your characters feel? That is more important than what it looks like. You can illustrate a place by how a character’s views of it changed.
I used to hate hospitals. I once almost passed out from the smell. Not really sure why I had this aversion. Now, I work in a hospital.

Give place an active role in the story by giving character active relationships with it.

The setting must be observed and then conveyed in its particulars.  The devil is in the details. Emotions are more easily evoked when the details are specific.

Perfume a novel by Patrick Suskind is set in 18th Century France. How it really was. No one bathed. There was raw sewage. In other words it stank.

In the period of which we speak, there reigned in the cities a stench barely conceivable to us modern men and women. The streets tank of manure, the courtyards of urine, the stairwells stank of moldering wood and rat droppings, the kitchens of spoiled cabbage an mutton fat; the unaired parlors stank of stale dust, the bedrooms of greasy sheets, damp featherbeds, and the pungently sweet aroma of chamber pots.

The author catalogs the odors, but never describes what they smell like. He lets the reader fill in the rest.

From Layering: Not Just for Cakes

Chris Redding lives in with her husband, two kids, one dog and three rabbits. She graduated from with a degree in journalism. When she isn’t writing and giving workshops, she works part time for her local hospital.

Her latest release is Blonde Demolition out November 15, 2011.

You just can't hide from the past... 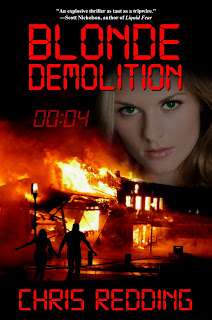 Mallory Sage lives in a small, idyllic town where nothing ever happens. Just the kind of life she has always wanted. No one, not even her fellow volunteer firefighters, knows about her past life as an agent for Homeland Security.

Former partner and lover, Trey McCrane, comes back into Mallory's life. He believes they made a great team once, and that they can do so again. Besides, they don't have much choice. Paul Stanley, a twisted killer and their old nemesis, is back.

Framed for a bombing and drawn together by necessity, Mallory and Trey go on the run and must learn to trust each other again―if they hope to survive. But Mallory has been hiding another secret, one that could destroy their relationship. And time is running out.

Thank you for having me today.

For one lucky commenter I have an assortment of notecards. Winner must be in the .

Thanks for have me Jen

I really like your blog and I was looking for a Top Assignment Help Online service to help me with my studies and There are so many types it's hard to say but I read your blog and I'm excited to read it and your blog is so interesting.