What is the worst thing you’ve written, how did you learn or know it was bad, and what did you learn from it?
The worst thing I ever wrote had to be a love letter begging a high school boyfriend not to break up with me.  I stayed up all night stating my case - told him how awesome we were and it was meant to be.  The upshot?  He must not have felt the magic because it was over the next day.  Not that I can blame him – I’m sure the letter smacked of crazed adolescent desperation.  But hey – when you speak from the heart, you can’t go wrong, right?  My hindsight lesson: practice your craft on the exes - LOL!

Why did you start writing and when did you decide to go professional?
Around eight or nine years old, I started writing plays.  A week before a family reunion, I’d crank out a script on my parents’ old Smith Corona and cast my brother and younger cousins in roles.  On “opening night” we’d charge admission by passing around one of my mom’s Mason canning jars.  So I guess you could say that was my first paying gig as well.  Fast forward many years later – in grad school, one of my papers won a prestigious award, and around that same time I was published by the National Council of Teachers of English.  It was probably in the late 90’s that I knew I wanted to write professionally.

Do you write in more than one genre?  Which ones and which do you like the best?
I write children’s books, middle grade, and young adult.  I also dabble in poetry although I’m not very good at it.  Shel Silverstein’s my idol when it comes to verse.  I did recently write a book in verse about creepy creatures.  Here’s my poem on Zombies:

Brains for breakfast – brains for lunch
Brains for dinner – brains for brunch
Flesh with fries is what they crave
When they burst out from their grave
The walking dead’s alive and well
Most come from a voodoo spell.

Do you read other author’s books when you're writing?  If so, do you read the same genre or something different?

Oh my goodness – yes!  I’m like the fourteen-year-old who never grew up.  I love Rachel Cohn, Francesca Lia Block, Sara Shepard.  I dig graphic novels like Jennifer Holm’s Baby Mouse and Jeff Kinney’s Diary of a Wimpy Kid series.  My students will often suggest books to me so I get a lot of recommendations from them as well.  In the interest of full disclosure, I’ve never read the Twilight series or Harry Potter.  Shameful, I know.

What is the most difficult part of the entire wiring process for you?  Queries, pitches, editing, etc.
Definitely revision.  To take out a line or a scene or even a character that I have fallen in love with is a real drag.  I might think a line is funny or clever but if three people are telling me it doesn’t work, I have to go with that.  Majority rules…

Judy Blume – she’s my idol.  Loved her growing up – love her now.  And if I had to guess, I’ll bet Margaret Simon of Are You There God is one buxom agnostic hottie today!

Author Bio: An award winning author and teacher, Kimberly Dana enjoys teaching writing to middle school students who give her much inspiration and insight into the world of tweendom. She is published by the National Council of Teachers of English and the recipient of several writing honors from Writers Digest and the Pacific Northwest Writers Association. Other affiliations include the Society of Children's Book Writers and Illustrators and EPIC, the Electronic Publishing Industry Coalition, where she serves as a judge for the annual eBook competition. Kimberly's most recent books include her YA thriller, Cheerage Fearage (Wild Child Publishing, 2012) and the delightful picture book, Pretty Dolls (Tate Publishing, 2011). A lover of photography and experimental cooking, Kimberly lives in and with her husband and spoiled shih tzu, Gizzy. Kimberly invites her readers to visit her at kimberlydana.com. 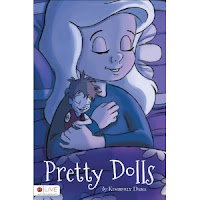 Pretty eyes and pretty hair.  We’re the best dolls anywhere.
If you were a pretty doll, you’d be up here standing tall.

It’s a pretty doll’s world.  Just ask beautiful Emily-Nicole, Lilly-Kate, and Chloë-Anne who perch on the tippy top bookcase shelf in little Tasha’s bedroom.  Yet it’s Gracie, the purple-eyed, one-armed, spiky haired doll who’s won the snuggly arms and heart of Tasha.  Only Emily-Nicole will have none of it.  Little does Tasha know that when the lights go out in her room, the doll wars begin…

Great interview! Thanks so much for participating Kimberly!