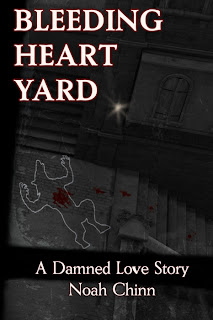 When Peter got home he had almost forgotten about his other problem. The thrill of victory offset other thoughts of defeat. As far as he was concerned Amy was just some girl he couldn't help but swear around. Worst came to worst, he'd simply avoid the tavern.

Except that tavern was a block away from where he worked. It could still cause problems. But the thought of someone being his soul mate. It was... well, it was irresistible, wasn't it? How could you be told about something like that and not want it to find out more? The fact he knew nothing about her only made it more exciting. It was like one of his high school fantasies, the one he had after the desert island with the supermodels, but before the Xena phase. Peter shook himself out of it. It was ridiculous. And if it was true, what did it say about the past? What did it say about Carol?

He opened the door and jumped when he saw Red lying on his sofa watching TV, eating a bowl of cornflakes on his stomach.

“You know, I figured out how much icing sugar you have to add to make Corn Flakes taste like Frosted Flakes.” He held in a burp. “It's a lot. Your place is a bit of a mess, you know.”

“Door was unlocked. Well, it was after I unlocked it. You were late.”

He set his shoulder bag down and crashed into a chair. “I was celebrating. They liked my design.”

“Cool. By the way, your girlfriend is really messed up.”

“Who, Eve or Amy? Either way, she's not my girlfriend.”

“Amy. There is something very strange about her. I was watching her at the tavern for a few hours. I wanted to see if your curse had any noticeable effect on her. Nothing. But that's the way it's supposed to be, she's supposed to be clueless. But she has her own unique weirdness going on that has nothing to do with us. Cool, huh?”

“I guess. What kind of weirdness?”

“What do you know about past lives?”

“Not bad,” said Red. “They've all got something to them, except the hooey bit. Would it surprise you to find out that Amy experienced one?”

Peter laughed. “In the last twenty-four hours I've had to come to grips with the fact that I was cursed by a witch when I was a child, that soul mates exist but I can only swear around mine, and that my mini-mall project that should have failed miserably didn't. So no, I'm not surprised. Also, a minute ago you asked 'What do you know about past lives?' so I count that as a give-away.”

“Fair enough. But this is a bit different. We've all had past lives of one sort or another, but I saw Amy relive hers. Her aura changed; for a moment she was two different women, overlapping one another. I saw the aura argue, fall to the ground and die while the real Amy stood perfectly still. When she snapped out of it she freaked out. I've read about this in the Big Book, but I've never actually seen it.”

“Do you think that could somehow be connected to my curse? Some kind of side effect?”
Red sat up on the sofa, cleared a spot on the coffee table and put the bowl down. “Well, yes and no. When the curse kicked in it was like an arcane A-bomb going off. If I had been in London I'd have seen it a mile away. But it wouldn't have been able to create anything new any more than a bomb could. It's just raw release of energy.”

“The way I saw Amy react, I think she's experienced this before, a long time ago, but had it under control. What you did was trigger a relapse.”

“You really shouldn't be smiling when you say that.”

Red stopped. “Oh, sorry. It's just really cool. I want to see if I can talk to the past life, see if it's aware of what's going on, or if it's just a recording. Not nearly enough legitimate research has been done in this field.”

Peter sighed. “Don't you have something a little more important to take care of first?”

“Past lives can be pretty distressing, you know. I would have thought you'd be a bit more concerned about your sweetheart's welfare.”

“Oh, for the love of... she's not my sweetheart! Yes, I hope you can do something about her problem too, but it's not like I know her. I don't believe in that eyes-met-across-a-crowded-room nonsense, regardless of Rule One.” Red began to sing 'Some Enchanted Evening' and Peter had to speak up to get him to stop. “I do believe that the Bleeding Heart Tavern is a block away from my office and if she accidentally gets too close to me I might curse my way right out of a job.”

“Relax,” said Red. “I'm here. I'm on the case. You need to buy some Frosted Flakes.” His arms danced to an imaginary rhythm.

“I think you're coasting a sugar high.” Peter said, then frowned. “You know what bugs me most? I never believed in soul mates because they represent ridiculously high standards. I've always hated those insipid Hollywood rom-coms that tell us there is a single perfect someone out there for us and we should never settle for second best. Now I find out there is a single perfect someone and I've found her.”

“I never said she was the only one.”

“I also didn't say she was perfect. Maybe soul mate is the wrong term. How about soul match? We're not talking about you two being made for each other on some divine workbench. It's a compatibility issue, and perfectly compatible is not the same as perfect. Perfect is boring. There are three billion or so women on earth. Maybe half a billion of them are within your potential age range. Maybe fifty million of them speak English. Of them, you might find a dozen like Amy. Of course, if you did you'd run into the exact same problem. Okay, shall we get started on some simple counterspells?”

“Do you think they'll work?”

“Probably not. But how they fail might point me in the right direction.”

“Fine.” Peter looked around, but saw only Red's small knapsack next to the sofa. “Where did you put that Big Book you were talking about?”

“Oh. I thought it would have been a lot bigger than that.”

Red pulled out a small leather bound book, the size of a hardback novel, but only as thick as a pen.

“Check it out,” he tossed it to Peter, who fumbled and almost dropped it. It was heavier than it looked. “Oh geez, I forgot you were a klutz. Careful!”

Peter opened it. “The hell? An eBook reader?”

“Top of the line! I wanted one big enough to have a touch screen and handwriting recognition. It's got every book in mom's library on it in .pdf format, and a bunch more I've added in the last few years.”

“I don't know, I'm not the expert. I assumed you needed the old books to make it work.”
“They weren't old when they were written.”

“The originals, then. Like the spell was imbued right into the page.”

“You're thinking back to our Dungeons and Dragons days. Doesn't work that way. Come to think of it, aside from that I'm kind of surprised how much the first edition got right. Maybe Gygax was one of my people. Now, I just need a few minutes to raid your kitchen and we'll get started.”

“What, didn't you bring what you need? I don't have any eye of newt on my spice rack.”

“No, I need to make myself a decent sandwich. That sugar buzz is wearing off.” He snickered. “Eye of newt. Noob.” 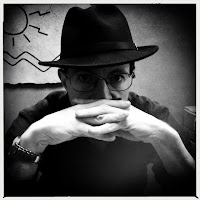 Noah Chinn was born in Oshawa, Ontario, and has never really forgiven it for that. After high school he fled his hometown in favour of the freezing winters of Ottawa. Three years later it dawned on him that higher education and frostbite did not have to go hand in hand, and finished his degree in Toronto.

Love the excerpt! Thanks for participating Noah!

Mossfoot said...
This comment has been removed by the author.
3:58 PM

Happy to do it! :) Also I just noticed that I used a galley copy in the excerpt I sent you, so hopefully the readers here will forgive any slip-ups that were probably cleaned up in the printed version.

I am so proud of you, Jenn. I remember when you all but gave up on getting published; now, look at you. Keep up the amazing writing. As for me, I look forward to LUCKY'S CHARM.