Purdon:  My first attempt at a novel was terrible. I knew it was bad when I put it aside, then came back and read it later. I did all the wrong things – passive voice, rigid adherence to the “rules” of grammar, poorly developed characters. I learned to relax and write like I would tell the story in conversation.

Purdon:  I have a vivid memory of standing in my front yard when I was about four or five years old, wishing I knew how to write down the words in my head. That’s the first time I remember wanting to be a writer. It took me a couple of decades to overcome a bad childhood to the point that I felt confident enough to take a professional stab at it.

Purdon:  My fiction, whether reading or writing, has to be something possible in the real world. I like to create a fictional mirror of real-life situations. I’m not sure which genre that fits into, if any.

Purdon:  Yes, I always have something on hand to read. I tend to read a lot of history and biographies. When I read fiction, I lean toward the classics, but I do try to read some of the other authors I interact with on Twitter and Facebook. I try not to read anything too similar to what I’m currently writing because I don’t want to subconsciously assume another author’s voice.

Purdon:  The pitch. I’m really bad at that, whether it be in answer to the “what’s your book about” question or the blurb on the back cover. I think it’s because I get so emotionally attached to what I’m writing ... and I have walls around my emotions that reach to the moon.

Purdon:  I would like to have the financial success of John Grisham, the stamina of Stephen King, and the longevity of Shakespeare. Other than that, I wouldn’t change a thing.

Author Bio: Carl Purdon lives in with his wife and two of their four children. Pontotoc is halfway between , which is the birthplace of Elvis, and , which was the home of William Faulkner. Since he can’t sing, he writes. Since he’s not an expert on anything in particular, he writes fiction. In February he released his debut novel, The Night Train, and has been pinching himself ever since. 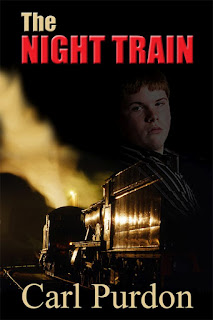 Abused at home and bullied at school, young Jayrod Nash steals away on a freight train with a vow never to return. His best friend tags along, but his heart’s not in it. They meet up with a hobo named Farley, who offers protection in exchange for obedience, and soon learn he’s running too.

“The Night Train” is a novel about the struggle of innocence against brutality, written with powerful characters who allow no commentary from the author. Together they paint a picture of life as it exists too often.

Carl Purdon weaves a tale that takes the reader through the full gamut of emotions, and leaves them feeling as if they have known the Nash family all their lives. Perhaps they have.

Thanks Jenn, for your interest in my writing. I think it's a great thing you do spotlighting other writers on your blog. Writers are a very supportive group.

Thanks for participating Carl!! Great to have you here.
~Jenn