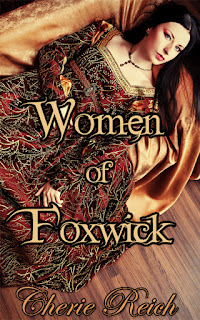 Follow five women from Foxwick in this five-story fantasy collection.

A bard will lose her head, if she doesn't find the correct notes. A dragon seer must decide whether to betray her dragons or her fair kingdom. An assassin will journey to the Shadowlands to destroy Death. Twins are selected for the Mage Game, and a princess will journey to Valdale in search of the sorceress who can save Foxwick.

With a table-sized cloth draped over her arm, Vesta tiptoed toward the wounded moss-colored dragon. The creature whimpered, and tendrils of smoke escaped from his flaring nostrils. He stomped his feet, nearly bumping against the trees. Black blood oozed from the wound where the short spear punctured and remained in his forearm. Vesta glanced toward her cottage, but she could barely see it in the nearby valley. Perhaps she should’ve brought some water to clean the dragon’s wound. Oh, well. She had no time to go back.

Get it out, Vesta. It hurts. The dragon’s words vibrated through her mind.

“Calm down, Attor, and let me help you. It’s your own fault, you know.” She grasped the spear in two hands. “Close your eyes. I’ll pull it out.”

It’s not my fault. He squeezed his eyelids shut. Be quick. Count to three.

He opened his eyes and peeked at the wound. It’s bleeding. Fix it.

“Don’t be so bossy, mister.” Dirt coated her dress, and she brushed it away as she stood. A breeze brushed against her uncovered head. She yanked her cloak’s hood over her hair. If anyone saw the violet strands . . . . Then, she fastened the cloth over the wound. “There. All better.”

“Don’t be so dubious. It’s unbecoming.”

His belly rumbled from laughter.

“And why were you in Donal’s fields? I thought we agreed you would track game in the forest.”
But sheep taste better.

“You’re just lazy. Other dragons are happy to hunt for their food instead of snatching a free meal.”

What do you know of other dragons? We all love easy meals. His forked-tongued darted out and licked his lips. He eyed her like a juicy morsel.

She shook her head and laughed. “You wouldn’t dare.”

“Nope.” She patted his paw. “Who would tend your wounds otherwise? Besides, my kind is even rarer than dragons.”

Author Bio: A self-proclaimed bookworm, Cherie Reich is a writer, freelance editor, book blogger, and library assistant living in Virginia. Her short stories have appeared in magazines and anthologies. Her e-books include a horror novelette titled Once Upon a December Nightmare, a short story collection with authors Aubrie Dionne and Lisa Rusczyk titled The Best of Raven and the Writing Desk, the futuristic space fantasy trilogy Gravity, and The Foxwick Chronicles, a series of fantasy short stories. She is a member of Valley Writers and the Virginia Writers Club.

Love the cover!! Thanks for sharing with us.

Terri Talley Venters said...
This comment has been removed by the author.
10:24 AM

Thanks for having me, Jenn!