What if your past comes back to haunt you?

Chelsea James, captain of the Biggin Hill First Aid Squad, has had ten years to mend a broken heart and forget about the man who'd left her hurt and bewildered. Ten years to get her life on track. But fate has other plans. 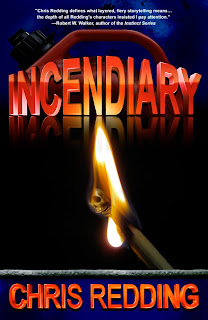 Fire Inspector Jake Campbell, back in town after a decade, investigates a string of arsons, only to discover they are connected to the same arsons he'd been accused of long ago. Now his past has come back to haunt him, and Chelsea is part of that past.

Together, Chelsea and Jake must join forces to defeat their mutual enemy. Only then can they hope to rekindle the flames of passion. But before they can do that, Chelsea must learn to trust again. Their lives could depend on it.

Excerpt
A sinister scene from her younger days crept into her conscious mind. Another fire, or a bunch of them, that had been set. Accusations had swirled. Her bravado of moments ago left her.
Mark made a noise that brought Chelsea back to the present.
She gauged they’d been in the house fifteen minutes, and her air should be running out soon. She motioned for her partner to move forward, then she thought better. She wouldn’t be a hero and risk her life for a house. She shoved Mark toward the door.
Someone had torched the place. She had no doubt. Her heart pounded in her ears. Sweat snaked its way down her back and she swallowed through a dry throat. The person had poured the accelerant in a deliberate pattern. As if mocking her.
Her lungs struggled to pull in enough oxygen for her body to stay on the job. Her adrenaline had taken the last train to Clarksville.
Chelsea squinted as a flash appeared and a wall of flame shot up between her and the guys on the other line. “What the hell?” She shoved her partner and the hose back toward them.
“Flashover.” The deafening roar obliterated her voice. She shouted louder.
The wall to her right burst into flames. She redirected the spray until the fire died. What would she encounter next?
She labored for every breath as if the air came through felt.
“Chief, I can’t see Jay and Wagner.” Clutching the hose with now achy fingers, she willed the fire back as if it were a demon that rose from the ashes of her past.
With teeth clenched, she hosed down the base of the flame, eager for it to die.
“Wagner’s down,” she heard and knew the demon insisted on winning. Her SCBA buzzed. Five minutes before she’d have no air. Or less.
She motioned for Mark to help Carl Jay pull his partner out of the fire.
“Get out. The roof’s caving,” the chief yelled.
Mustering the last of her strength, Chelsea followed the other three to safety. Behind her, a loud crunch issued from the house like the last gasp of the demon they’d been battling.
The house fell with one final groan.
www.chrisreddingauthor.com
http://chrisredddingauthor.blogspot.com/