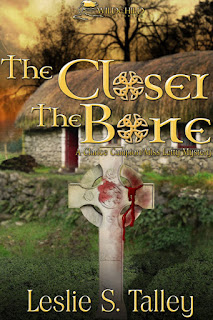 Innkeepers Clarice and Otis Campion, along with Miss Letty, former star of the Silent Screen, have a penchant for stumbling over bodies, from fresh to skeletal. At their historic B & B, Belgrath House in Daytona, Florida, Otis discovers a skeleton in the dumbwaiter [Make Old Bones]. When they act as exchange innkeepers at Castle Keep in St. Augustine, they find the body of a homeless man in a dragon sculpture and a skeleton in an icehouse [Bred in the Bone]. So it isn’t any wonder that their sojourn in Flanagan’s Guest House, Bray, County Wicklow, Ireland, could be more of the same.

From the first they find themselves between two feuding families, the Quinns and the Donovans. Assorted disparate winter boarders add fuel of their own. Seamus Quinn is found stabbed and bleeding out on Flanagan’s doorstep, but the trail of blood comes from the Donovans’. Had Seamus Quinn tried to blackmail someone? Why do people keep disappearing and reappearing at Flanagan’s? And when Fergus Flanagan returns abruptly from his exchange at Belgrath, who put foxglove in his tea?

Inspector Swaney thinks he knows: those obnoxious American exchange innkeepers. Clarice and Miss Letty have better ideas. Their search for answers has them crisscrossing Ireland.
But the murderer has plans for Clarice. Clarice’s escape and the resulting revelations rock Ireland to its core.

Excerpt:
The wail grew closer, sounding more dirge-like. I felt the rumble of the ground under my feet, reminding me of a Shuttle launch. Would I ever see the Space Coast again? Would I ever see the contrail, hear the cheers and applause as another rocket roared into the Florida sky?

I was brought back to earth by an arm around my neck almost lifting me off my feet. One toe dragged in the dirt as she inched me forward. I needed to get her off balance. I remembered the classic moves I had heard from a police officer on TV one night. How to escape from someone who grabbed you from behind. Instep! Elbow to stomach! Two fingers aimed at the eyes! And while your assailant doubled up from the stomach blow, turn and lift that knee and lift it high.

Probably didn’t hurt a woman as much as a man, but effective, nonetheless. I executed Steps One, Two, Three, and Four as if I’d taken karate all my life instead of just Tai Chi. I ground my heel into her left instep, slammed an elbow into her ribs, rammed two fingers blindly backwards and felt a satisfying squish. I whirled around. She doubled over, clutching at her eyes. I raised my knee to her groin and sprinted out of her way. I raced towards the house, panting so hard I couldn’t scream. My feet actually kicked my butt as I churned up dirt. I risked a glance over my shoulder for my pursuer, but no one followed. No one stood on the embankment.

When I heard that dreadful screech of brakes on rail, I knew why.


I am the product of basically three states, Kentucky, Missouri, and Florida. I grew up in Ashland, Kentucky. I graduated from a diploma nursing school in St. Louis, my parents' birthplace. I transferred my credits to the University of Kentucky (Go Wildcats) and received a B.S. in Nursing. After working briefly for the St. Louis County Health Department, I married Luke, an engineer with McDonnell-Douglas and fellow Wildcat. We have lived in Titusville, Florida ever since.

When I turned forty, I returned to school, the University of Central Florida in Orlando, where I changed majors and received a B.A in English (Literature) and an M.A (Creative Writing). I taught Business Writing, Technical Writing, and Creative Writing there as an adjunct for ten years.

My husband and I, both retired, have two grown children: daughter Terri, a CPA and Wild Child Publishing author of Carbon Copy; and son Damon, a former Education Specialist with Kennedy Space Center and now employed by Harris Corporation. They have given us four grandchildren. I enjoy water aerobics, oil painting and drawing, writing and reading mysteries, and messing around on Google Earth.
Posted by Jenn Nixon