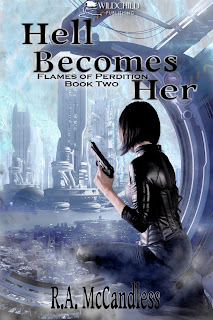 Angels should be a human’s worst nightmare. Del didn’t think there was anything worse than angels, or their fallen kin, demons. She and her partner Marrin helped to keep the world safe from the horrors of escaped demons for generations. But when Del’s daughter is kidnapped by a shadowy group, Del will find that the world is even more dangerous than she suspected.

There are worse things than angels and demons.

The doors slid back exactly as they were supposed to, and Del pointed both her SIGs through the opening. She knew it was wrong. Two hands on one gun with a straight-thumbs hold was the correct way to give proper support to aim and shoot quickly and consistently. Hollywood liked to show action heroes shooting from the hip, or blasting away without aiming and taking down a room full of bad guys, whose best response was to fire impotently at the ceiling or comically into other bad guys. It was all so much useless eye candy. A gun in each hand gave support to neither and made it impossible to sight. She’d need independent use of each of her eyes, like a chameleon, to train the guns on different targets at the same time.

Del knew it was wrong, but it looked damned impressive from the receiving end.

Del wasn’t certain if the order was for her, the two ranks of Ljosalfar soldiers in their body armor who surrounded the elevator, or both. Either way, holes weren’t being punched into her favorite skin and that was a good thing. She might still die, riddled with bullets and spitting blood, but not yet. Not yet.

She unwrapped and wrapped her fingers on her SIGs, and smiled.

“Alfred, you cunning bastard,” Del purred. “Come on in and give me a hug. I’ve solved almost all your problems. There’s only one left.”

“I’d rather you put down your weapons,” Alfred replied. Del homed in on his voice from behind the second rank of soldiers, but couldn’t make him out through all the helmets. “We’ve locked the elevator. The doors won’t close, and the car won’t move. Let’s talk about this.”

“Talk about what?” Del said and laughed. “How you lied to your people?  How you betrayed and murdered your own?  How you’ve doomed them through your schemes and plots?”

R.A. McCandless was born under a wandering star that led to a degree in Communication and English with a focus on creative writing.  He’s the author of the urban fantasy “Tears of Heaven” winner of the 2014 Best Science Fiction and Fantasy Preditors & Editors Reader’s Poll and a 2015 EPIC eBook finalist.  His shorts have appeared in “In Shambles” (with Kevin J. Anderson) “Gears, Gadgets and Steam” and “Nine Heroes”.  His next book, “Hell Becomes Her” will release in 2015.  He continues to research and write historical and genre fiction, battle sprinklers, and play with his three boys.