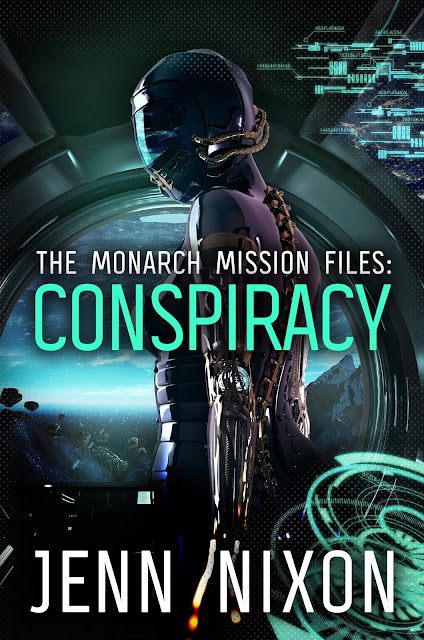 Mari Yosoto has been keeping a dark and dangerous secret from everyone since her life-changing
accident. No one would believe the truth anyway, her ex-fiancé had seen to that. Instead of wallowing in misery, she stays busy, shuttling cargo to the Moon and back, enjoying the easy work and time alone. When an old EarthCorps acquaintance asks for her help finding a missing girl on Mars, Mari can’t say no, even if it means working with the ex’s former best friend.

Although Trevor Nash took the Mars job to help his former commanding officer, deep down he needed to see Mari again. After trying and failing to find out what happened to her, Trevor makes the best of an odd situation, hoping he can remind Mari of their budding friendship and finally get answers. When their rescue mission goes sideways and they find the not-so-missing girl, a centuries-old conspiracy theory emerges and the only thing more unfathomable is learning Mari’s secret.

Beep. Beep. She lifted her head, shielding her eyes from the bright lights above her head.

Beep, beep. Beep, beep. There was something wrong with her hand. It didn’t feel right.

A pair of voices echoed from behind her, muffled and indecipherable through the fogginess filling her mind. Half of her body felt numb and cold, the other covered in fiery pins and needles. When she cried out in agonizing pain, the pair of brown eyes that filled her vision seemed familiar.

The accident flashed in her head.

Can’t wait until April? Check out Jenn’s MIND series – you can get book one for FREE!
Posted by Jenn Nixon

I recommend you to check https://domyhomework.guru/blog/cause-effect-essay out before writing Cause and Effect Essay. Here you can get some tips to use

First of all, we want to remember that hundreds of girls really want to meet men. If you are lonely and want to chat or maybe get married, this dating site is perfect for you, because it would definitely be the person you spend your nights with. The functionality is great for me, I want to thank the creators, you are the best! ukrainian mail order wives. It was very quick to find a girl because there are a lot of them on this platform and the team has helped me to find the girl that was just what I wanted!