My new book cover!! I love it.

As always, Pretty AF Designs totally gets me. She never disappoints.

*Spoilers in the blurb if you haven't read book 1* 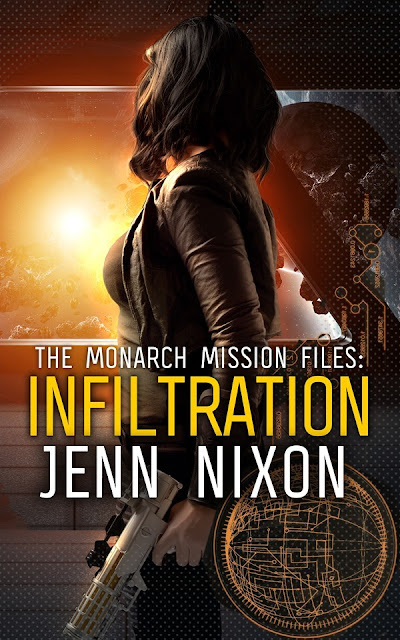 Mari Yosoto thought sharing her deadly secret with her new friends would turn them away, not into a family. Now, the Monarch Crew’s next mission is to scour the solar system and take out the cult-like One Race Project. Standing in their way is Mari’s dangerous ex-fiancé, Nobu, whose obsession with Juniper and her enhanced siblings is only surpassed by his fixation on Mari’s cybernetic limbs and extraordinary blood.

Trevor Nash vows to protect Mari and the team from Nobu, despite being out-powered and outmatched. He does his best to keep the crew sane and steady, even at the cost of his own mental health. Aware that Mari’s medical scans may be the key to finding and taking down the cult, he calls on his former commanding officer for help. But something sinister is brewing under the surface.

When Nobu manipulates Mari into leaving the ship and abandoning the mission, Trevor, Juniper, and the rest of the team break every rule to find her and bring her home. If the One Race Project gets everything they need to finish their 200-year-old plan perfecting human evolution, the fate of humankind will change forever.
Posted by Jenn Nixon

It will be useful for you to visit https://payforessaywriters.com/how-to-write-an-essay. Here you can read more about writing essays


I really like and appreciate your post.Thanks Again. Keep writing.

Some people wear disposable lenses for theatrical purposes and use color changer lenses. Zen Green CBD There are all types of contact lenses including those with logos and animal eyes.What are a number of the advantages of using disposable contact lenses?
https://listofdiet.com/Zen-Green-CBD/