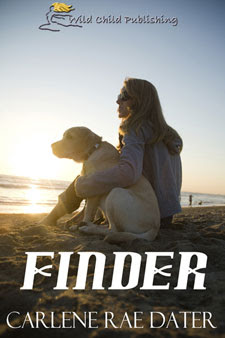 All her life, Carol Reston has wanted to be a published author. She's looking for a dynamite idea for a novel that will sell when her husband David suggests she look into a series of women missing from their small town of Oakdale, a suburb of San Diego. Carol decides to investigate the disappearances and write a fictionalized account. David takes their overweight dog, Chauncy, for a walk but soon blasts through the front door telling Carol he found dead body. Her response? Cool! That might just work. But David's not kidding.

Carol is both horrified and fascinated by the thought of a dead body, and as a lover of mysteries, she's thrilled to be so close to the police action. Whose body is it, and more importantly, what did she die of? The police aren't talking. Meanwhile, Carol sets out to follow clues determined to track down the missing women. She becomes so involved with her search she doesn't realize her husband is acting strangely until it's almost too late. Could David be having an affair? What about her best friend, Elizabeth? Is she one of the missing women? Will Carol figure out the mystery before it's too late?

With the help of her thrice-divorced, martini-drinking, Jaguar-driving, world-traveling Aunt Sissy Montgomery, Carol locates all the women and discovers the identity of the body. In the end, Carol has a book contract, Chauncy has a new playmate, David has his dream job and Sissy has found a new calling. She’s a Finder

FINDER is a humorous mystery with a little romance mixed in for fun, now available through Wild Child Publishing

Carlene Rae Dater began her writing career as a journalist writing hard news, feature articles and humorous essays. You can find her online:

Thank you for participating Carlene!

Congratuolations on your Blog Tour, Jenn :)
Great story, Carlene! I love how you mix humor with mysetery and your characters sound delightful-love eccentric aunts!

Well, I've found everyone loves humor! I started as a freelance writer and used to write a lot of humorous essays. They always sold. I just sold a novella titled "POOF!" but don't have a pub date yet. I'll post it on Facebook as soon as I know.

Happy New Year Carlene! Love this story so much. Thanks for giving us a fun read!

What are you currently working on?

Happy New Year Carlene! Thanks for the fun, fast read! What are you working on right now? And when will you have another novel out?

I'm working on a mystery that takes place in a small town on the Oregon Coast that looks a lot like Coos Bay! I haven't done a mystery in a while and am having fun writing it. Only up to Chapter five so I have a ways to go.