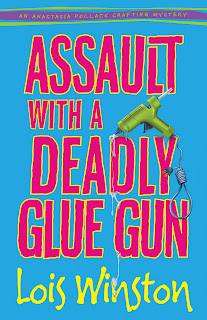 Lois Winston is both an award-winning author and award-winning designer. Her latest release, Assault With a Deadly Glue Gun, the first book in her Anastasia Pollack Crafting Mysteries series (available now online at Amazon and B&N, in stores Jan. 8th), received starred reviews from both Publishers Weekly and Booklist. PW said, “Crafty cozies don't get any better than this hilarious confection,” and Booklist stated, “Winston has hit a home run with this hilarious, laugh-until-your-sides-hurt tale. Oddball characters, uproariously funny situations, and a heroine with a strong sense of irony will delight fans of Janet Evanovich….” Kirkus Reviews called it, “North Jersey’s more mature answer to Stephanie Plum. Funny, gutsy and determined, Anastasia has a bright future in the planned series.”

When magazine craft editor Anastasia Pollack's husband permanently cashes in his chips at a roulette table in Las Vegas, her comfortable middle-class life craps out. Suddenly, she’s juggling two teenage sons, a mountain of debt, a communist mother-in-law, AND her dead husband’s loan shark. And that’s before she becomes the prime suspect in the murder of a coworker she discovers hot glued to her office chair. Anastasia now must add reluctant amateur sleuth to her job description in order to clear her name.

As if Anastasia weren’t busy enough, she and her fellow editors blog at Killer Crafts & Crafty Killers. You can find it at http://www.anastasiapollack.blogspot.com/. Mondays through Thursdays one of the magazine’s “editors” blogs about her area of expertise -- crafts, recipes, decorating tips, fashion, etc. On Fridays the blog hosts guest authors, many of whom 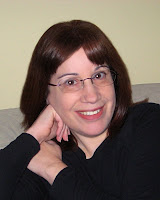 give away copies of their books.

In celebration of the release of Assault With a Deadly Glue Gun, Lois is doing a blog tour throughout January. You can find the schedule on her website, http://www.loiswinston.com, and at Anastasia’s blog, http://www.anastasiapollack.blogspot.com. Everyone who posts a comment to any of the blogs over the course of the month will be entered into a drawing to receive one of 5 copies of Assault With a Deadly Glue Gun. (If your email isn’t included in your comment, email Lois privately at lois@loiswinston.com to let her know you’ve entered.)

Glad to have you on the tour Lois! Congrats on the new book!

Thanks for having me, Jenn! Happy New Year to you!

I've read both of Lois's previous books and enjoyed her sense of humor and talent for telling a great story. Looking forward to reading this one, too.

I can't wait to read this. Will probably buy it on Kindle today. I do really enjoy the gimmicky mystery series'.
Good luck and really like the new author pic.

Thanks, Shobhan and Chris! As for the new author pic, it was about time, wasn't it? That old picture was taken in 2003!

Congrats Lois! Have fun with the blog tour and your new release!!

Congrats on the new release!

Congrats on your release! I love the title!

Happy New Year! Congratulations, Lois on your stunning success! Your use of humor and quirky characters fills a void in the literary field. Best wishes for the entire series.
Thanks, Jenn for working to bring talented people into our offices-wherever that may be~

Thanks, Vikki, for stopping by and your kind words.