Thanks to everyone for stopping by yesterday for the Q&A with Larry Payne. Stay tuned for more excerpts and interviews in the coming weeks!!

Now, for some fun.

What did you think of Idol? I've been pretty good at predicting the top three, but this year, the talent is amazing and it's been hard, but I think I'm ready to commit.  I know, I know, some of you think Pia should win, but she's more Adult Contemporary than Pop, which is why she didn't get votes this week, though she was amazing. What a voice! In American Idol, the little girl vote rules and they love James & Lauren, with good reason, they are both outstanding. Casey is getting a bad rap for some reason, but he's fantastic. Scotty is perfect for Country and he'll have no problem getting a deal. I don't like Stefano, sorry. Jacob's singing is not my favored style, but he's good. I don't think Paul is radio material, but he's a great performer. Halley keeps surprising me. She MAY be the dark horse cuz she is getting better each week...So I predict, (which is actually the same picks I had during the top 20) that Casey, Lauren, and James will make it to the end.

And for even more fun: (It's with love I did this!) 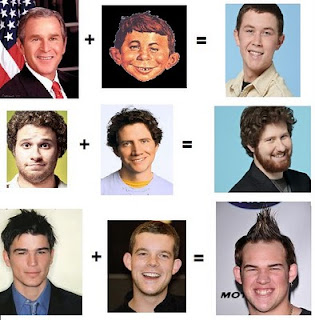 Survivor was AWESOME this week. Poor Matt, done himself in, didn't he? I know people are hating the fact that Rob is running the show right now, but he's the best and he's showing you why! At this point, he's the only one who deserves to win (Aside from Matt the underdog, who has a good shot if he gets back in again) But the previews show Grant trying to make a move. Smart, but he doesn't know Rob has the idol and that's going to bit him in the ass.
For you Smallville fans out there, the Pilot is on tonight!
I want my Gossip Girl back, damn it.
Criminal Minds was okay this week, not a very good plot, but the side plot with Hotch and the team was great. I love how Morgan and Rossi always get under his thick armor.
I AM SO SAD that Courtney got voted out of Biggest Loser! I had her pegged to make it to the end! She so deserves it. <3 Courtney!
Am I the only one still watching The Event? Actually, at this point, I hope so, because some of the plot is eerily close to the book I finished a few months ago. UGH!
Big Bang Theory, always great. Love "Blossom" on the show, she's super. Now they just need to get rid of Priya cuz she's ruining the dynamic between Penny & the guys.
I checked out that new show CHAOS, it was pretty good. I'll give it another go.
Oh, I watched Tangled yesterday. LOVE LOVE LOVE! The songs weren't as good as Princess & the Frog, but the story was great and it was VERY funny. I totally want that braided, flowery hair she had!!
I watched Eat, Pray, Love the other day and thought it was a great movie. Doesn't make me want to read the book though.
Did you watch anything you loved this week? I'm all ears!
Posted by Jenn Nixon

No, you're not the only one that watches The Event. I've been a loyal fan since the start. Also, NCIS, NCIS:LA, all the CSIs, Survivor, Amazing Race. I know there's more.
I'm especially looking forward to the summer season. Dark Blue, America's Got Talent and Warehouse 13. If you've seen Warehouse 13,make it a point to give it a look.

I knew there were more. How could I forget Tom Selleck's Blue Bloods and also Chicago Code. Oh, yeah, I can't forget Ghost Hunters. Believe or not, I still find time to write. DVRs are wonderful things.

CHANGING MY LIFE AND OTHER RANDOMNESS said...

We didn't get to see Smallville tonight. I was very disappointed as there was a Bulls game on instead. I hate that the CW and WGN are on the same channel hear locally. By the way, I think Warehouse 13 is awesome...

I finally watched the pilot episode to AMC's new series The Killing. If anyone remembers the old show Twin Peaks, it reminds me of that. The Killing was pretty good and i'll have to put it on my record list.