Today's guest is Linda Parisi, a friend I met at an NJRWA meeting. We were both pre-published back then, but she beat me to the punch and put out her book first!!
Thanks for joining us today, Linda!
Enjoy & Comment!
What is the worst thing you’ve written, how did you learn or know it was bad, and what did you learn from it?

Wow, tough one. I'm a slow learner. I think it took 3 full manuscripts that are in the drawer for me to learn some of the right things to do. Over the years I've learned that we always write some bad stuff. I still get 'the email' or the 'look' that says 'you know better than that'. Of course I do. But maybe I was being lazy, maybe I didn't know exactly what I wanted to say, but I know, now, to forgive myself for it and just fix it instead of being crushed. I think the best teacher for me was writing book after book after book.


Why did you start writing and when did you decide to go professional?
I've been writing since I was a kid. I've always loved writing and reading. Despite my BS degree, I graduated college with 24 credits of English. I decided to write for publication in 1993. I learned h
ow to be professional as I learned how to improve my writing skills--through writing organizations, workshops, contests, and conferences.


Do you write in more than one genre? Which ones and which do you like the best? My favorite genre is Paranormal, my second Romantic Suspense. And I love combining the two. With Paranormals, I get to build my own world and make my own rules. With Romantic Suspense, I get to use my scientific 'who done it' background. Troubleshooting a problem in science is much like working your way through a suspense, you think you know the ending but you really don't. And you have to work your way to the solution following logical steps for both.


Do you read other author’s books when you’re writing? If so, do you read the same genre or something different?
I don't have a lot of time. However, I will always make time for a fellow Liberty States Fiction Writers member's book. It may take a while but I do try to read them all. As for favorite authors, well, I have many but Caridad Piñeiro and Sherrilyn Kenyon are at the top of the list.
What is the most difficult part of the entire writing process for you? Queries, pitches, editing..etc.
Editing. I'm not good at it, which is probably why it took me so long to get published. But over the years I've learned how to step back and really look at my work, something that is extremely hard to do.


If you could have the same type of career as any author currently publishing who would it be and why? Umm, Sherrilyn, of course. Because she makes lots of money writing books I wish I could write. But I'm getting there. :)) 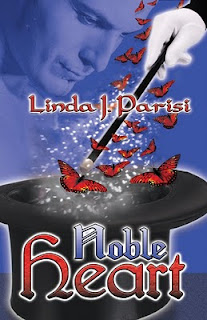 Author's Bio: Linda J. Parisi found her calling when as a scientist, she discovered romance. Her idea of the perfect hero is a cross between Frank Langella’s Dracula and his Zorro; tall, dark, handsome, and untamable. Her heroines will never give up or give in, so the sparks continue to fly through her books until her characters reach their happy ending. The road might not be easy but the fun is in the travel. She’s been a member of New Jersey Romance Writers and Romance Writers of America since 1993 and is now a member of Liberty States Fiction Writers. During the day she’s a research scientist and project manager for a diagnostic technologies company. But at night? At night, she gets to play with vampires.
You can visit Linda online: www.lindajparisi.com
Posted by Jenn Nixon

Thanks for participating, Linda!

Hi Jenn. Hi Linda! Very informative interview. I thoroughly enjoy reading all your books, Linda. But "Noble Heart" was my favorite :) And authors supporting authors is what it's all about. We learn something new with everything we read.

Thanks for posting the interview on FB, Jenn, otherwise, I would've missed it today. Ugh... another crazy day!
Mickey

Thanks for stopping by Mickey!