Spirit of the Mountain - Available Now 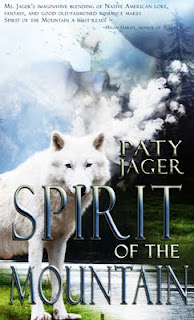 Wren, the daughter of a Nimiipuu chief, has been fated to save her people ever since her vision quest. When a warrior from the enemy Blackleg tribe asks for her hand in marriage to bring peace between the tribes, her world is torn apart.
Himiin is the spirit of the mountain, custodian to all creatures including the Nimiipuu. As a white wolf he listens to Wren’s secret fears and loses his heart to the mortal maiden. Respecting her people’s beliefs, he cannot prevent her leaving the mountain with the Blackleg warrior.
When an evil spirit threatens Wren’s life, Himiin must leave the mountain to save her. But to leave the mountain means he’ll turn to smoke…


Excerpt: Wren’s eyes glistened with unshed tears. “My gift is to save The People. The weyekin who came to me in my vision quest said this.” She wrapped her arms around herself as if staving off a cold breeze.


Himiin hated that they argued when they should relish their time together. He moved to her, drawing her against his chest, embracing her. The shape of her body molded to his. Her curves pressed against him. Holding her this way flamed the need he’d tried to suppress.


He placed a hand under her chin, raising her face to his. The sorrow in her eyes tugged at his conscience. To make her leaving any harder was wrong. But having experienced her in his arms, he was grieved to let her go. Even for the sake of their people.


Her eyelids fluttered closed. Her pulse quickened under his fingers. Shrugging off the consequences, he lowered his lips to hers. They were softer than he imagined. Her breath hitched as he touched her intimately. Parting his lips, he touched her with his tongue, wanting to see if she tasted as sweet as she smelled.


She tasted of sweet honey straight from the bosom of a bee tree.

Paty Jager is a member of RWA, EPIC, and COWG. Wild Rose Press has published eight of her books with Spirit of the Lake to release in May 2011.  Perfectly Good Nanny, won the 2008 EPPIE for Best Contemporary Romance.  She edited for an e-publisher for four and a half years and teaches workshops at conferences, writers meetings, and online.
You can learn more about her at her blog; www.patyjager.blogspot.com  her website; http://www.patyjager.net or on Facebook: http://www.facebook.com/paty.jager and Twitter: @patyjag.
Posted by Jenn Nixon