Today's Interview is with K.M Fawcett!

The worst thing I’ve written was my first manuscript. I didn’t have a literary background (I graduated with a Bachelors in Science). I didn’t have a critique group. I had recently learned about the Romance Writers of America, and saw that a chapter was holding a contest. I entered. When I received my submission back, there was A LOT of feedback written all over the pages. Apparently, my heroine was feral (she’d been angry at the hero and had barked at him, growled and probably made other animal noises I can’t remember), I head hopped too much, and included way too many tag lines. To which I responded, “What’s a tag line?” The judges were very nice and wrote helpful advice. One judge even included handouts on tag lines. I’m so glad they didn’t tell me, “You suck. Don’t quit your day job.” Because if they had, I might have cried and stopped writing. Instead, I continued to learn, grew thicker skin and have found an agent.

I started writing in 2003. I always wanted to write books and thought that when I have kids, I’d have time to write. I don’t know where that delusion came from, but when my second child was born, I decided it was time to sit down and start. I wrote on and off for the first few years, but then something clicked and I was determined to become published. I grew more serious about my goals and discipline. Last year, two fellow writer and martial arts friends and I created a group blog, Attacking The Page, where blog about martial arts and writing action. We also have been giving workshops (including at this year’s RWA conference) on Kick Butt Heroes: Using Martial Arts in Your Action Scenes.

I write paranormal romance. My first manuscript - that will never see the light of day, and took 4 years to NOT finish – was a time travel. I call that my learning manuscript. Every time I learned something new, I would go back and rewrite my chapters. I don’t suggest doing that. It takes too much time. My second manuscript (that my agent is currently shopping) is a sci-fi romantic thriller, and my third manuscript is a shape shifter romance.

I do read other books while I’m writing. I like to relax with a book rather than TV. So I usually read before bed or while waiting for a piano lesson or dance lesson to finish. I read all different genres. Unfortunately, I don’t get to sit and relax for extended periods of time, so it takes quite awhile to finish a book.

The most difficult part of the writing process is the actual writing. I love it, but I am a slow writer. I know what I want to say, I have no problems with the ideas, but it takes me longer than others to say it just right. I’m constantly searching the thesaurus for the precise word. I’ve learned to get the first draft out there as quickly as possible without worrying about grammar or word choice, etc. It’s the second draft that takes me the longest.

I’d love to have the career of any best selling prolific author. In order to generate the sales, you need a good book, and you need to be able to crank them out to get a following. I would love to be able to write 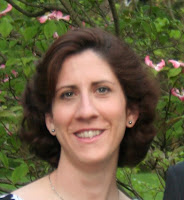 Bio: K.M. Fawcett was a born romantic. At six years old, she would beg her parents to take her a restaurant with “soft music and candles” where she could drink Shirley Temples and twirl on the dance floor. As she grew, her desire to be whisked into a romantic adventure by a knight in shining armor also grew to the point of annoying her friends and family.

When she received A Knight In Shining Armor (a novel by Jude Deveraux) on her eighteenth birthday, she fell head over heals in love…with the romance genre. K.M. now writes paranormal romances and enjoys stories filled with adventure and strong, kick butt heroes and heroines. She is a member of the Romance Writers of America and the Liberty States Fiction Writers. K.M. is a Nidan (2nd degree black belt) in Isshinryu Karate and co-owns and operates the Tenchi (Heaven and Earth) Isshinryu Karate Dojo with her husband in Lebanon, NJ.

She is also a certified women’s self-defense instructor with the FLAG (Fight Like a Girl) Program. When not working on her novels, blogging about martial arts and writing action, or working out at the dojo, she is home with her children. K.M. is thrilled to be working with the 3 Seas Literary Agency and looks forward to publication.

Nice interview, ladies. I can so relate to so much of what Kathy said--thought I'd have time to earn that pink Mary Kay Cadillac--an Escalade now, so cool--when I had kids--HEL-LO! I also seemed to have more writing time when the boys were younger but it's a constant adjustment game. Nice to see how far each of us has come; when I remember part of it is about process, I take heart and get back to what I need to learn at the moment.

One day we'll all be on the best sellers list right? YAY!

Thanks for interviewing me, Jenn!

After re-reading, I realized that I wrote "tag lines" instead of "tags". I must have promotion of the brain or something. Oh well. Thanks again.