I grew up in a house full of readers and everyone’s tastes were different. Horror for my brother, sci-fi and fantasy for my uncle and my mom adored romance and mystery. Of course, I became a voracious reader and I devoured everything in the genres they read. Sometimes I would complain that a certain book hadn’t ended right or that the hero should have done something different for a more satisfying outcome. One day, after a particularly long rant, my grandmother said, “Why don’t you try writing your own?” I did and by the time I was in high school, I’d written my first novella. Writing felt good and it felt right. I knew, without a doubt this would be what I wanted to do when I grew up.

I primarily write paranormal romance, but I have dabbled in urban fantasy and horror. My first love is all things horror, but I enjoy weaving romance into my stories since it does play such a big part in our real lives. I’ve always loved the idea of a heroine overcoming supernatural obstacles in her path and finding love on the way. I think this is why my stories tend to be a bit darker than some others you may have read.

When I’m writing, I really don’t read anything else. I tend to get into the zone and have a one track mind when it comes to the plot and characters. I don’t want anything to corrupt my story or be similar to anything else that’s already written.

Synopsis writing is the bane of my existence. It’s beyond me how as an author, I can write you an entire novel, but ask me to sum it up in 2 to 7 pages… forget it!

Author Bio: Even as a child, Michelle Clay wasn't afraid of the things that went bump in the night. In fact, the thought of a world where werewolves roamed and Dracula reigned king may seem like an eldritch dream to most, but was exciting to Michelle. Instead of turning on a light for comfort, she reveled in the dark, imagining what was roaming the night and frightening those who didn't truly appreciate the supernatural.

Nowadays, her visions continuously take shape as she brings life to the worlds she has imagined since childhood. The wild imaginings that often got Michelle out of, or more often into, trouble as a young girl have informed and enriched her storytelling as an adult, bringing a fresh new voice to the paranormal romance genre. 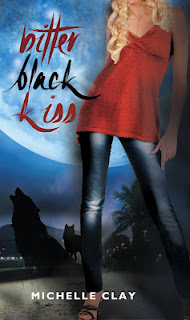 Bitter Black Kiss
Former event planner Nicole Riley lost not only her job, but part of her humanity when a concert in L.A., fails in catastrophic proportions as the band attacks a rival werewolf pack in attendance. As one of the infected, Nicky has been keeping her “inner beast” in check by taking wolf’s bane, trying to remain in denial, and refusing to become a monster. She’s also slowly begun to rebuild her reputation after the massacre and has deep respect for Sean Stone because he took a chance on her when no one else would. Now she is in charge of the entertainment for all of Sean’s nightclubs and her life is as close to normal as it gets. Then Brody, the dee-jay at Bitter Black, plays on her sympathy by claiming to have just suffered a wolf bite and she can’t turn him away. She’s very attracted to Brody, but is it wise to mentor him when she can’t even accept what she is? Things take a dark turn when she finds out he’s been lying to her all along.

Brody Dunn is a former police detective in special crimes, a unit that deals with werewolves. When a stripper is found in an alley with a lethal dose of BST (street name: Beast) in her system, Brody poses as a dee-jay at Bitter Black. He’s convinced Sean Stone is the one bringing the drug into the city and his employee, Nicole was the last one in the dancer's apartment. Brody also knows that Stone has laid down a challenge to the local Alpha and wants to become Pack Leader himself. A change in leadership that Brody is dead set against. In order to get close to Stone, he uses Nicole and pretends to be newly infected by the werewolf virus. He knows that she’s a bleeding heart and will do what she can to help him. What he doesn’t count on is the way Nicole affects him by merely walking in a room.

Stone is used to having his way and getting what he wants. He now wants Nicole whether she’s agreeable or not. He’s more than happy to expose Brody’s secrets to her while hiding his own. Will Nicole be able to navigate the dark and treacherous path between the two men? For it’s not just a choice between her career or her heart, but her humanity hangs in the balance. Which will she choose?
Posted by Jenn Nixon

I normally comment earlier in the day but I've got a Day Job again! BOO! Love the interview and excerpt!! Thanks for the great read!

Thanks Jenn! It was fun and not your everyday interview. :)

Great interview into the beginning of your writing extravaganza and what tantalized you into your current genre of writing. Loved Bitter Black Kiss! Can't wait for more