Driven to rule and afraid to die, a powerful Priest sacrifices all for "an end that never ends" from a Darkness older than Time.

In The Elder, the latest installment of The Martuk Series, Jonathan Winn, author of Martuk … The Holy, digs deeper into the world of ancient Uruk.  A world of power and absolute rule.  Of magic and superstition.  Of Dark Gods and mysterious Ancients, magical Immortals and unseen Seers.  Of powerful Priests cloaked in robes of red and gold and a Man from the Mountains who has yet to arrive.

From the innocence and depravity and blood-drenched chaos of The Wounded King, we now follow The Elder, a Priest desperate to rule, blinded by power, afraid to die.  A man who climbs deep into caves beneath sun-scorched mountains and sacrifices anonymous flesh in a blood-stained Temple.  A desperate soul driven by words whispered from the lips of a doomed Child and haunted by the warnings of an Immortal buried in ash.  One who makes an impossible choice for the promise of Life Everlasting and, riddled by doubt, chooses again, this final act of violent desperation opening the way for an ancient curse from a Darkness older than Time. 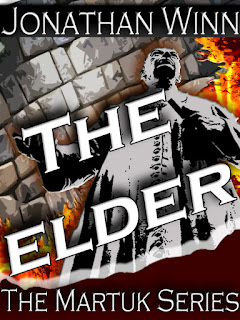 From the whispered pleas to the Darkest of Gods to the anguished screams of the stolen innocent, this is … The Elder.


The Elder is the second book in The Martuk Series, an ongoing collection of Short Fiction inspired by the full-length novel Martuk … The Holy.

I watched him as he paced.
"Who else?" he continued.  "Who else did you see?  Who made you so nervous and scared?  Who?  Because there was someone -- "
"No."
"Yes," he answered, "because since you've returned, out of nowhere, it seemed, you've carried the weight of a thousand stones on your shoulders."
I closed my eyes, the sudden memory of the warriors as they pushed their way from the stone, the ash, the very ground at my feet, taking my breath.
He stopped and watched me.
I opened my eyes, the wine at my lips.
"Perhaps -- "
"No," I interrupted with a swallow, the cup back on the desk.
"Yes, to hear for myself --"
"Don't.  Please," I insisted.  "It's dangerous and I can't bear to lose you."
"Yet you'll send me into the wilds in search of some Man from the Mountains.  Some stranger who may or may not be able to speak with Those Beyond the Veil?  Or Call the Rain?  Into the dark with the beasts to bring back some boy?  Why?"
"I can't bear to lose you," I said again.
"I need to speak with the Gods," he added, ignoring me.
Then he turned and quickly left the room.
I scrambled from my seat and followed.
He rushed before me down the hall, through the dark, past room after room, his goal the small door at the end.  A room where blood was spilled and the Gods revealed our inevitable ends.
Pushing the heavy wooden door open, he stepped inside.
As did I.
I found him gazing at the small cistern.
The water in the basin waited, clear, calm, powerful.  The polished stone of its base as smooth and dark as the shadows that surrounded it, the charred and broken bones trapped within its perfection feeding its power.
The water would speak.  Would foretell that which was to be.  Would show this man, this Tall Priest, my beloved, the nightmare that awaited him.
It must not.
He circled it once, twice, three times, the ritual begun.
"Please," I implored him, "don't."
I stepped toward him.
A blade came from his sleeve then, the metal at his wrist, his slender arm over the shimmering basin.
"The Gods wish to take me from you," he said.  "And for what?"
"The Darkness," I whispered.
He paused, his eyes on mine.
"The Darkness," he repeated.
"It knows my heart."
"And is your heart so easily bought?"
I couldn't respond.
"Tell me," he continued, "what does your heart say?"

Jonathan Winn was born in Seattle and raised in a small town in Western Washington State. After graduating high school and then living in Los Angeles for the better part of a decade, he moved to New York City where he lived in Greenwich Village with his two dogs.  But after almost twenty years, the pull of family led him back to the Northwest where he now lives. Again.

Like most writers, every word Jonathan writes -- whether it be screenplay, play or book -- is accompanied by endless cups of coffee with lots of milk and sugar (the ratio changing depending on whether he slept five hours or six hours the night before).  He's also regarded as politely relentless by his friends, unbearably annoying by his enemies, and recently discovered he makes a mean fried chicken, often used to placate those aforementioned annoyed ones.

The full-length novel "Martuk ... The Holy" as well as "The Wounded King" and "The Elder", both from "The Martuk Series", a collection of Short Fiction based on characters introduced in "Martuk ... ", are just three of the books in Jonathan's rapidly expanding bibliography.

Nice to meet you Jonathan =) Your stories sound fascinating! Congrats on your success as a writer.

Wonderful to have you here Jonathan! Thanks so much for participating.

Thanks for stopping by Terri! <3

Thank you so much, Terri. Love having the chance to meet potential Readers. Kinda love you guys. (^~^)

And thank YOU, Jenn, for having me. Always a pleasure. :^)