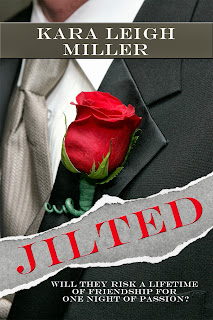 Amy and Brett have been friends since they were kids; and their friendship has withstood the test of time. But can it withstand Brett's fiancée, Vanessa?

Brett Hudson has often wondered what it would be like to be more than Amy's friend, but when he's chosen as the newest professional dancer on Dancing with the Stars, he meets Vanessa, one of the shows costume designers and it's a whirlwind romance that ends in a wedding proposal. As the big day draws closer, Brett begins to think that marrying Vanessa might be a bad idea. She wants him to give up Amy. Completely. Will he give up his best friend for the woman he's supposed to marry?

Amy King is heartbroken to learn that Brett is marrying another woman. But, when Brett is jilted at the altar, he begs Amy to go on his honeymoon with him. A week on a tropical island with her best friend, the man she's fantasized about for years is a dream come true for Amy. But when Brett suggests crossing the line from friends to lovers, Amy is reluctant. Will she risk years of friendship for one night of passion?

Excerpt:
"It's because you go for the wrong type of guy," Brett said matter-of-factly, pouring a third shot down his throat. "Those muscle bound jocks are all bark and no bite. They look good on the outside, but they're a mess on the inside."

Amy threw a piece of ice at him and laughed. "And the goody two shoes, school teacher types you date are much better?"

"Nope." He grinned. "Which is why we're both still single."

She sighed. "Yeah, so much for my dream of having kids."

"You're young. I'm sure you'll find someone." He drank his last shot and chased it with his beer.

"I'm thirty, Brett. By the time I find a man, date him, and get married, I'll be an old hag with no viable eggs."

The thought of Amy finding a man to marry and have kids with didn't sit well with him. He couldn't stomach the thought of losing her. "I'll tell you what." He leaned across the table and pointed at her. "Three years from now, if neither of us are married, I'll marry you and give you as many babies as you want." Brett's words were slurred. Yup. He was definitely drunk. He wouldn't have made that proposition otherwise.

"Yeah right." Amy rolled her eyes. "You and me? That would be like fucking my brother. Thanks, but no thanks."

He flinched at her words. "You think of me as your brother?" That bothered him a lot more than it should, especially considering he'd never once thought of her as a sister.

She shrugged. "We're best friends. How else would I think of you?" Amy glanced away, and then set her gaze on him again. "Why? How do you think of me?"

Oh shit! He hadn't expected the conversation to backfire on him like that. What was he supposed to tell her? That he thought of her as a best friend that he wanted to fuck? No, he definitely couldn't tell her that. "As a friend, I guess. I don't know. It's not like I sit around and think about how I should think of you. You're Amy."

Today, Kara resides in Upstate New York with her husband, five kids, three cats, and two dogs. When she's not reading or writing, she's spending time with her family and friends.
Nothing excites Kara more than hearing from her fans. So, send her a note. She'll go total fan girl over it! 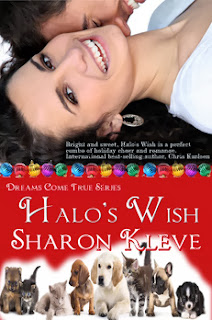 Halo Ann Carlyle wishes for a home, family, and a boat-load of pets. What she gets is a bruised hip, a lump on the head, a broken ankle, and her new yellow Honda Civic is demolished.

Rich McFarland, a sexy veterinarian, keeps showing up in the most unexpected places, promising everything she's ever wanted.

Halo believes she only has time to pursue her career as a pet detective and must ignore her growing attraction to achieve her dreams.

Will Halo trust her heart, and find a way to get both for Christmas?

Excerpt:
She'd just placed another call through to Pemsky's office, which went straight to his voicemail, when the office door opened. Halo smiled and looked up into dreamy, gold-flecked green eyes, short sandy brown hair, a slight cleft chin, and full lips set in a hard line. Even with the stern look he had on his face, her hormones jumped into overdrive.

Mr. Dreamy cleared his throat—she must've been staring. In her most professional voice she said, "Good morning. How may I help you?"

He removed a piece of paper from his shirt pocket and unfolded the sheet.

"I was parked in front of the Beacon Hill Ale House and my driver's side mirror was sideswiped by one of Pemsky's Security's SUV's Friday night."

Halo loved the Beacon Hill Ale House. Every Saturday night the Ale House allowed local bands to jam together. That's where she'd met her last loser boyfriend. She'd had a lot of loser boyfriends. She's currently on a hiatus from dating, but she wouldn't mind jumping back into the dating game for this dream-boat.

He handed her the piece of paper.

"I wasn't able to get a look at the driver, but I got the license plate number of the vehicle that hit my car and drove away."

He emphasized the last part.

"I'm very sorry about your car. I'm sure Mr. Pemsky will be happy to cover the damage." Halo checked the company log and Pemsky's name popped up as the driver—she gulped.

Sharon Kleve was born and raised in Washington and currently lives on the Olympic Peninsula with her husband.

One of her favorite things to do is picking up a new book and sinking into the story, immersing herself in the emotions between the characters. She hopes to inspire her readers the same way her favorite authors have inspired her.
When not writing, she can usually be found either curled up in her recliner with her cat and a good book, or in the kitchen baking sourdough bread or bagels.

Legal Information:
- Entering this contest means you have read, understood, and agree with all rules and regulations stated.
- Entrants must be 18 or older (or age of majority in your country) to enter and to win.
- No purchase necessary.
- Void where prohibited.
- All stated rules are subject to change without notification or reason given.
- Chances of winning vary widely based on the number of entries received.
- Prize is as stated. No substitutions or exchanges.
- Contest host/organizer is not responsible to misrepresented/mis-typed email addresses, spam filters, mailer demons, and other internet wackiness that may crop up at the time of winner notification.
- Winners are final.
- Contest Starts 00:01EST September 15, 2013 and Ends 12:59EST October 16, 2013 and open to International participants.
- Winners will be notified via email, Twitter, or Facebook no later than 12:00EST October 18, 2013
-Respond by date to collect prize is 14 days from notification date.
Posted by Jenn Nixon