When trust becomes a matter of life or death… 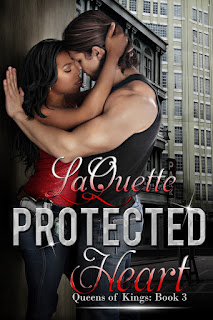 Heart Searlington, captain of the seventy-fourth precinct in Brooklyn, New York, has everything she could ever want.  The sexy as sin husband, the perfect house, and the perfect addition to their family, four-month-old Amare.

But when a senseless act of violence threatens the lives of two people she loves, Heart does what comes natural to her…she protects what’s hers.

Kenneth Searlington, billionaire real estate tycoon, is living the ultimate dream—family, friends, and wealth.  Life couldn’t be more perfect, until trusting the wrong friend puts his life on the line.
When he can’t trust friends or family, Kenneth takes matters into his own hands.  Who should Kenneth trust?  The wife who lied, or the friend and family who betrayed him?   Maybe the only person he can trust is himself?

When protecting the heart she loves forces Heart to omit certain truths about herself and those she loves, can Kenneth see past her betrayal long enough for her to keep him alive?

Excerpt:
The subtle touch of fingers so familiar to his skin he could confuse it for his own grazed the slick skin of his shoulder until it slid down his back as smoothly as the droplets of water raining down on him.
“You okay?” she asked softly into his ear. “I was afraid today was too much for you. You’ve only been back home a handful of days.”
He nodded his head, eyes still closed to the streaming water saturating the thick strands of his hair.
He felt her hand crawl back up the length of his back, the movement making the muscles that rested just beneath her digits twitch in anticipation. Heart was right, he had returned from the hospital several days before, but in that time the two of them had barely spent any alone time together.
They’d both been physically present, and usually that was all it took to stoke the embers that always seemed to be on a low simmer just waiting for an excuse to fan the flames to full blaze. But since his release there had been something there, something that was keeping them from being them.
Kenneth turned his head slightly toward the sound of her voice. He opened his eyes just enough to see the water-sprinkled vision of her standing to the side of him. He pulled her into his embrace and pinned her back against the wall between his outstretched arms.
There was nothing like the sight of his wife naked and waiting for him. No matter how difficult things were between them they’d always had this. It baffled him that he’d allowed whatever this was between them to fester to the point where he hadn’t touched his wife in days.
The knowledge that she’d kept something so important from him fucked with his head in a way he hadn’t anticipated. Truth was he really hadn’t even given serious thought as to why her omission of the facts about Bryan and Justice impacted him so much.
But to deny himself this, this connection, this reassurance that his world was grounded, that they were whole, what the fuck was he thinking?
He positioned her directly under the spray of water and watched the fullness of her hair flatten against her scalp and back. She would bitch at him later about having to go to the hairdresser, but the thought of that conversation alone was pulling up the corners of his mouth into a wicked smile.
He allowed his fingers to rest at the base of her head, fingers caressing her nape in just the right way to make her fall into his touch. His heart tightened slightly. They’d been stressed and their connection strained, but underneath all the bullshit, it was still there and he was grateful for it.
Their connection is what kept his soul intact, what kept him sane enough to deal with the rest of his life when dealing with the craziness that wealth brought.
“We have a lot to discuss, Heart.”
“Kenneth I—”
He leaned down and pressed a hard kiss to stop whatever it was she was about to say. Words weren’t what they needed now. He giggled to himself. If their shrink could hear his thoughts she’d be jumping up and down screaming her opposition to his line of thinking.
Kenneth wasn’t against therapy. It had definitely worked to get the two of them back on track, and he definitely wanted them to sign up for a session or two after this latest fiasco, but this wasn’t something that needed fixing. This was the one way that their communication was perfect and they were absolutely in sync.
He plunged his tongue inside the warmth of her mouth and savored the sweet hint of apple juice that danced on his taste buds.
He pulled back just a moment to give them each a chance to breathe.
“I’m not avoiding the conversation we need to have, and as soon as we’re finished in here we’re going to throw on some clothes and go downstairs in the kitchen and hash this shit out over a cup of coffee. But right now, I just need to feel my wife.”
http://smarturl.it/ProtectedHeart

A native of Brooklyn, New York, LaQuette spends her time catering to her three distinct personalities: Wife, Mother, and Educator. Writing--her escape from everyday madness--has always been a friend and comforter. She loves writing and devouring romance novels. Although she possesses a graduate degree in English Lit, she'd forego Shakespeare any day to read something hot, lusty, and romantic.