I'm gearing up for the release of the FINAL book in the Lucky Series. It has been a amazing and long journey, but I think book three really brings the story to an fantastic conclusion. 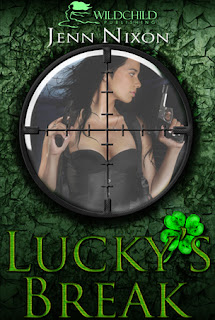 Here's the opening chapter for Lucky's Break from Kenji's point of view. RAR!

Shoukan tracked his target halfway around the world. Her last known location had been in the south of the Balearic Islands. Knowing her helped to pinpoint where she would be. Finding her amid the winter tourist crowds, however, required patience, determination, and focus. He had plenty.

During the weekdays, he searched every bar, hotel, and restaurant open. Each weekend he went to Pacha, the only open nightclub on Ibiza. Twenty-seven days on the party island might have been paradise for many. It felt like torture for Shoukan. He was not there for pleasure. He had to find her. No matter how long it took, he would.

He eased his way through the sparsely populated Global Room, kept his eyes sharp, looking for her face in the crowds or her body swaying on the dance floor. Either would capture his attention; he needed only a second to recognize her.

The restaurant area of the club had more people, lights, and louder music. Cliques of scantily dressed and overly made-up women laughed and drank. Couples, unaware of the others around them, groped and fondled each other to the beat of the music.

His target was not among them.

After he checked the Pachachacha room, he retreated to the first section. In season, the room held more than thirty five hundred bodies. During his last three visits, the tame crowds had topped around a thousand. The winter crowd was a saving grace. He easily made out each face in the dim lights. Presently, three hundred or so people danced and bounced to house music.

He sipped an imported beer and scrutinized the dance floor from the elevated sitting area. Pungent perfume, sex, and sweat hung in the air. The same typical scene unfolded before his eyes. Only the people changed.

He cared little for dancing alone and made no effort to fit in. Nor did he attempt to conceal himself or hide in the shadows.

Knowing he’d be easy to spot, he remained in the open. His posture commanded attention. His build rivaled that of an American wrestler. Least that’s what people told him. The dark hair hiding his face, green-tinted glasses shielding his eyes, and the stern expression finished the ominous package. He was a killer and looked the part. It kept everyone