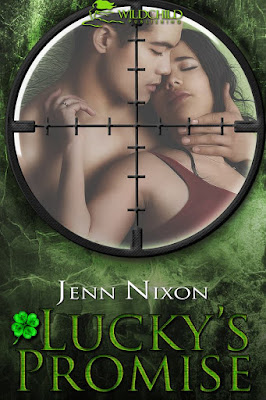 This was a tough book to write but totally worth it in the end. I loved following Lucky and Kenji on their journey to find each other and a little bit of peace in the end.


The house was completely dark when Kenji steered the car up the driveway. He didn’t expect Felicia to wait up for him, not at this hour. After turning off the engine and collecting his luggage, he tapped the code into the security pad. The door clicked open. Inside the foyer, he hung his coat and proceeded up the stairs.

On the second floor landing, he paused to listen. Nothing stirred. He moved down the hall and approached Felicia’s door. Testing the knob, he found it unlocked. Kenji walked inside and then set his bags down. When he entered the bedroom, Felicia jerked under the covers. He approached silently and noticed she was still sleeping. Her eyes moved rapidly under the lids; her body twitched.

Gritting his teeth, he turned away and stripped out of his clothing. Reluctant to disturb her, he decided against a shower, knowing she’d wake up. He walked around the bed, heading for the living room when he heard a muffled cry. Kenji spun around. Felicia bolted upright in bed.

“Good God,” she whispered from across the room, hand on her chest.

“I did not mean to startle you,” he said from the doorway.

“It’s all right,” she said, wiping her forehead. She pulled the covers down the other side of the bed. “Tired?”

He moved slowly, studying Felicia during the approach. When he sat down on the edge of the bed, she shifted behind him.

Then she touched his shoulder. “Babe?”

Kenji faced her. She inched closer and cupped his chin. He stared into her eyes, hoping to quell the beast writhing inside. Felicia stroked her fingers through his hair. Light, feathery touches brushed his neck. He wrapped his arms around her waist, pushed her back on the bed, and set his head against her chest. She was warm and soft, everything he needed to pull him out of the darkness he faced the last several days. Her presence calmed him in ways he still didn’t understand.

He shut his eyes, held her tight, and breathed her in. When he shuddered at the images filling his head, Felicia kissed his temple and stroked her hands down his back. As he glanced up, their eyes met again. She looked exhausted, worried, and scared, although she’d never admit it. Leaning in, he gently pressed his mouth to hers, wishing he had the strength to confront and comfort her.

“I told you I’d be here.” She smiled sweetly, brushing the hair from his face.

Kenji put his head back down and clutched her closer. She threaded her legs through his and wrapped her arms around his shoulders, letting her fingers follow the trail of his spine. Kenji focused on her. The slight rise and fall of her body as she breathed. How perfect she felt beneath him. Her gentle caresses soothed him, and he eventually fell asleep in her sheltered embrace.