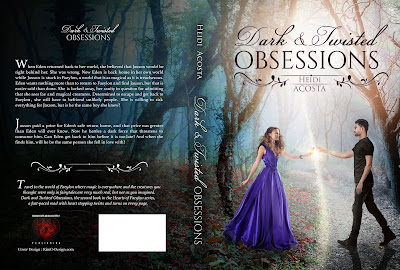 When Eden returned back to her world, she believed that Jaxson would be right behind her. She was wrong. Now Eden is back home in her own world while Jaxson is stuck in Faeylon, a world that is as magical as it is treacherous. Eden wants nothing more than to return to Faeylon and find Jaxson, but that is easier said than done. She is locked away, her sanity in question for admitting that she sees fae and magical creatures. Determined to escape and get back to Faeylon, she will have to befriend unlikely people. She is willing to risk everything for Jaxson, but is he the same boy she knew?


Jaxson paid a price for Eden’s safe return home, and that price was greater than Eden will ever know. Now he battles a dark force that threatens to consume him. Can Eden get back to him before it is too late? And when she finds him, will he be the same person she fell in love with?


Travel to the world of Faeylon where magic is everywhere and the creatures you thought were only in fairytales are very much real, but not as you imagined.


Dark and Twisted Obsessions, the second book in the Hearts of Faeylon series, a fast-paced read with heart stopping twists and turns on every page.