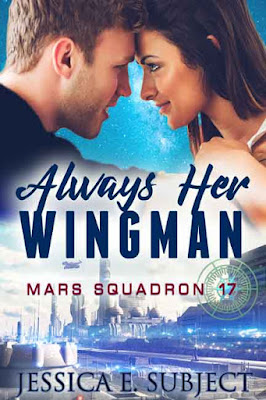 Staff Sergeant Hannah Coriveau dedicated the last five years to the Space Military Command. Heading back to Earth, she’s ready to begin civilian life and reunite with her parents and the boyfriend she left behind. The person she’ll miss most is Garish—her wingman, best friend, and the one who made her regret not being single.

Senior Airman Colin Garish wants his squadron leader. Bad. After spending so much time by her side—both in the Martian skies and on the red planet—being her friend isn’t enough. When Hannah learns of her boyfriend’s infidelity, Colin is there to comfort her.

Before Colin has the chance to confess his feelings, Hannah receives worse news from home. Her father is dying. Seeing her devastation, Colin remains the friend she desperately needs. But in her grief, she pushes him away. Will Hannah let him back in her life when they land on Earth? Or will Colin never get the chance to win her heart?

The shuttle lurched as it landed on the runway, jerking Hannah forward against her restraints. She and her crew had finally reached their destination. Earth’s moon. So close to home, and yet still so far away. With her mission almost over, she looked forward to outlasting the rest of the squadron during physical therapy then returning to the ones she loved. But first, she had to complete shutdown procedures. She pulled down levers and flicked off switches in unison with the rest of the squadron. A well-rehearsed dance they’d perfected when landing on Mars. This time, they flowed through the sequence with ease, as if they landed space shuttles every day.

The engine slowed in its vibrations until it stopped for the first time in two hundred and fifty days. Powered down. But tremors still quaked through Hannah’s body from the inertia. While the squadron waited for the noxious fumes to be blown away, she dreamed of sleep. Just a few hours to rest before she started reconditioning her body for Earth’s gravity. She’d tried to nap while in the crew quarters, but they’d been too close to their lunar landing for her to relax. Ramped up on energy for the past twenty-four hours, her excitement now wore thin, coming down from the rush.

And what was with Colin’s marriage proposal? He knew she had a boyfriend already. Was he delirious? Or maybe very homesick.

“Staff Sergeant Coriveau, is your squadron ready to depart the shuttle?”

Hannah glanced at four eager faces, guys she’d spent the last five years with. “As ready as we’ll ever be, Chief. We’re all very anxious to get back home.” And have a shower. Eat better meal bars. Sleep.

ABOUT THE AUTHOR:
Jessica E. Subject is the author of science fiction romance, mostly alien romances, ranging from sweet to super hot. Sometimes she dabbles in paranormal and contemporary as well, bringing to life a wide variety of characters. In her stories, you can not only meet a sexy alien or two, but also clones and androids. You may be transported to a dystopian world where rebels are fighting to live and love, or to another planet for a romantic rendezvous.

When Jessica is not reading, writing, or doing dreaded housework, she likes to go to fitness class, listen to BTS, and walk her Great Pyrenees/Retriever her family adopted from the local animal shelter.

Jessica lives in Ontario, Canada with her husband and two energetic children. And she loves to hear from her readers. You can find her at jessicasubject.com.

In my opinion, information from https://celltrackingapps.com/track-cell-phone-location-without-them-knowing/ will help you to track cell phone. I had such experience recently

The Doy said...
This comment has been removed by the author.
9:11 PM

Alpha said...
This comment has been removed by the author.
11:50 PM

The Doy said...
This comment has been removed by the author.
8:15 AM

Alpha said...
This comment has been removed by the author.
4:34 AM

Spyware has changed a lot since then, and I’ve tested and used many different remote cell spy apps, surveillance programs, and security equipment. With this experience, I have become an expert on the best phone spy apps choices.

The Doy said...
This comment has been removed by the author.
8:57 AM

I can only said good things about this article which explains on how to track a cell phone location without them knowing, try it now on Techtime website. So many people have been using the guide in full usage and be benefitted from it. So will you.

Did you ever use a phone location tracker to track someone you like most? If not, I would like to give a piece of information about this kind of app for free. This app released by Spyine. Which will help you to track a cell phone location for free try Spyine app. And you can read lots of articles on the Spyine website as well.

Which brand of phone are you using right now? Do you know it's possible to track someone cell phone location without him knowing try http://minspy.com/phone-tracker/how-to-track-a-cell-phone-location-without-them-knowing/. Minspy is a much more popular app which will help you to track the most wanted person you want. Just try and enjoy.

Of course, I trust my girlfriend, that's for sure. But there are still moments when I think she's got something to hide from me. Sometimes, to see where she is or what apps she uses, I use mspy.com tool. It helps me track her phone whenever I'm worried about her. Think it can be helpful for parents too.

Rosi said...
This comment has been removed by the author.
5:20 AM

Ronald said...
This comment has been removed by the author.
10:59 AM

Alpha said...
This comment has been removed by the author.
2:06 AM

This exceeded my expectations and is better than anything else I have used. I would definitely recommend it for such service

Get in touch with Ultimate phone spy

Hi there, after reading this remarkable post i am too happy to share my familiarity here with friends.

Check out this web page
spy on android phone remotely

Best spy app for tracking phone https://www.techmaish.com/3-ways-to-track-your-wifes-phone-without-her-knowing/
Spy on her phone without even her noticing.

Tracking a cell phone location is not as hard as you thought it to be. In fact, it is one of the easiest things to do, even if you want to do it without the other person finding out about it. Therefore, without making you wait, let us start with this cool way to track a cell phone location.