Welcome to Lucky Valley where nothing is quite what it seems. 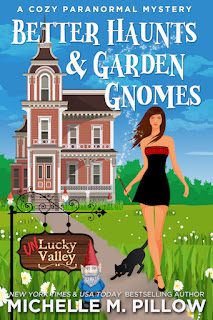 Lily Goode wasn't aware she had an inheritance waiting for her in the form of a huge Victorian house in Lucky Valley, Colorado. Life might finally be coming together for her. That is if you don't count the endless home repairs, dealing with eccentric Aunt Polly who claims they're both witches, and Nolan Dawson the handsome home inspector who seems to have it out for her, then, sure, life is grand. Oh, and not to mention the strange hallucinations and garden gnomes who are far more than lawn ornaments.

If mysterious accidents don't do her in, then the rebellious gnomes just might. With the help of Aunt Polly, it's up to Lily to discover who's sabotaging her new home and trying to drive the Goodes out of Lucky Valley once and for all.

In the town of Lucky Valley, Colorado, nothing is quite what it seems. As Lily Goode is quickly finding out…

Thump.
Her hands trembled as she gripped the railing. Nolan briefly placed his hand over hers, as if to steady her. They crept toward the bedroom.

Lily and Nolan reached for the door at the same time and pushed it with the tips of their fingers. The wood creaked as it opened.

They tilted their heads to look in.

The sound was faint, but Lily heard the muffled words as if they came from underwater.

Lily leaned closer to Nolan and tried not to make a sound as she stared at the room. A bed was in the middle next to a small dresser with a white porcelain bowl. The dresser slid an inch to the right and the foot of the bed lifted off the floor before thumping down.

Nolan again tried to push her behind him but she resisted and moved to see who was causing all the noise. The bed bounced in a steady rhythm. She slowly leaned to the side to peek along the hidden edge of the bed. The sound stopped. A gnome stood facing the corner like a punished child. Another gnome lay on the floor.

“I think Dante is right. It’s the creepy gnomes.” Lily stared at the little statues, watching for movement. A chill worked its way up her spine.

Nolan placed a hand on her arm. She jumped a little in surprise at the contact. He inhaled through his nose, and whispered, “Ghost.” The word came out on a white puff of breath.

The bed lifted higher than before and crashed down. When Lily turned her attention back to the gnomes, they had not moved, but there was a pair of transparent legs sticking out from under the bed. The ghost’s stained pants were frayed at the bottom hem and his boots were caked in dirt—if that was even possible.

“Uh, this house is not yours,” Lily said. “Go to the light. Begone spirit.”

“What are you doing?” Nolan whispered.

“Banishing him?” Lily shrugged. How the heck was she supposed to know what to do?

She pointed at the floor. “I assumed from the pants and boots, but I guess it could be a girl.”
“All I see is a couple of gnomes.”

The ghost’s feet kicked, and the bed lifted up only to fall with a bang.
“Stop that!” she ordered.

The ghost cackled and wheezed and did it again. This time, he shimmied until his feet disappeared under the bed. All noises stopped.

Lily turned to Nolan and grabbed his upper arm. “Nolan, if I was really in a hospital with something in my brain making me hallucinate, you’d tell me, right? I mean, you’d tell me if I was insane or none of this was real, right?”

“I’d be all right with that. Because, if you expect me to bend over to look under the bed to see if there are any big-bad scaries lurking beneath there, I’m telling you now that I don’t think I’m brave enough. I’ve seen how this horror movie ends. I’m not about to get sucked into a dark vortex by Cackles the Cowboy Clown.”

“Dark vortex?” He arched a brow.

“Every little kid knows about the dark vortex. It’s why we know not to go into closets or look under the bed.”

“Lily, do you want me to look under the bed for you?” Nolan asked, his tone aggravatingly calm and reasonable.

Nolan suppressed a grin. He lowered onto his hands and knees, threw the draped covers out of his way, and leaned close to the floor to look under the bed.

Lily felt a chill along her arm. She held her breath. Her eyes moved before her head turned. She came face to forehead with a ghost. He stood a couple inches from her face. When she glanced down, she saw his whiskers shift with a smile. “Boo!”

She gasped, jumping away from him.

The ghost crowed a high-pitched sound, holding his stomach and slapping his thigh as if it were the funniest thing in the world. “Oo-ee-ee-ee.”

“I don’t see anything,” Nolan said, still looking under the bed.

Learn more about Better Haunts and Garden Gnomes at MichellePillow.com

NYT & USAT Bestselling Author Michelle M. Pillow is an award-winning romance writer with over 100 published books over the course of her nearly 15-year career. She is best known for her Quirlixen World including the series: Dragon Lords, Space Lords, Lords of the Var, Galaxy Alien Mail Order Brides, and more.

Michelle is always up for a new adventure or challenge, whether it's a paranormal investigation of an old Vaudeville Theatre or climbing Mayan temples in Belize. She was a refugee extra on SyFy's Z Nation (2016).

You should definitely read this info about top spying apps. It will help you to learn more about tracking phones