Since I'm always FBing or Twittering about hot guys, it's only fair I talk about hot girls, right? I have my fair share of girl crushes and picked a new one for today! 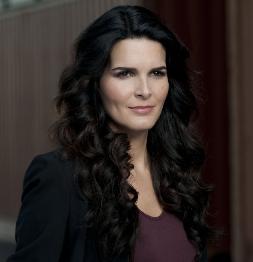 First of all, I LOVE her voice, deep and husky yet still feminine. Second, she's super pretty and funny and a kick ass tough girl! My favorite kind.

I first saw her in L&O (RIP, I still can't believe it's over...) and followed her to SVU and even watched that Woman's Murder Club show she was in for a second. (Hated the books!)

Now, she's found another great role in Rizzoli & Isles. She's the sarcastic tough tomboy detective who bounces off the Foo-Foo brainiac ME chick. Some may say she's type-cast as the cop chick, but if it works, go with it right? Another great thing about R&I is Bruce McGill. If you don't know who he is, shame on you. He's the new JT Walsh. If you don't know who JT Walsh is, BIGGER shame on you!

She also did the voice of Barbara Gordon in the Batman Beyond cartoon, which is a great use of her awesome voice!

I'm looking forward to the new season of Rizzoli & Isles. How about you? Have you seen it?
Posted by Jenn Nixon

Angie Harmon has always been one of my favorites. Just something about a good looking woman with a husky voice...:) Although, I've only seen a couple episodes of her new show, I'm glad to see her back.

Larry, I agree! She's super pretty! The new show is good, it comes back soon...it's a great summer time-suck! lol

She married to a hottie too (blush)

Yes she did Vikki! lol