Q&A Week 3!!
Thanks for stopping by! Today's interview is with Jae Lynne Davies!
Enjoy & Comment!
Do you write in more than one genre? Which ones and which do you like the best?
Yes, I write both Paranormal Romance and Urban Fantasy. I don’t necessarily prefer one over the other, but I find I have the most fun, occasionally blending the two.
Do you read other author’s books when you’re writing? If so, do you read the same genre or something different?
I do read books when I’m writing. In fact, if I experience writer’s block during the process, I’ll often stop and lose myself in another author’s world to escape for a while.
What is the most difficult part of the entire writing process for you? Queries, pitches, editing..etc.
I wouldn’t call editing a challenge. Instead, I’d call it tedious and constant. Even after my novel was published, there were things I wished I could go back and change.
If you could have the same type of career as any author currently published who would it be and why?
After meeting one of my favorite authors, Sherrilyn Kenyon, and spending a good part of the day surrounded by her staff, I would love a similar outcome. She has such a genuinely positive energy and appears to have a blast with fans and anyone else she comes into contact with. I could only hope to achieve such success!
Author’s Biography: Jae Lynne Davies has been an avid fan of the paranormal since childhood, when her imagination developed in the form of written word. Shortly after the birth of her second child, she began to weave tales based on elaborate ideas, and before she knew it, she’d created worlds where the passion is hot, relationships are forbidden, and the constant struggle of power leaves readers feeling for the villain today, and the hero tomorrow.
When not playing in her fantasy world, Jae Lynne—a native of , , now residing in , is a wife to a wonderful and supportive husband, and a mother to two young children. 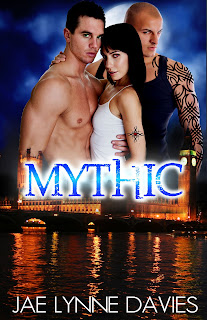 Book blurb: Centuries after the death of her family, human/vampire hybrid, Gianna Marino is determined to shed the blood of the vampire responsible.
Disguising herself as a human wanting to be turned, she infiltrates the enemy’s coven with the hope of bending him to her will and destroying him from the inside.
But when a handsome stranger enters the scene and is lured into their seductive game that results in a heated love triangle, she discovers a secret that blurs the lines between good and evil, forever changing the course of her existence, and destiny will soon determine on which side she’ll stand.

Thanks for stopping by, Abigail-Madison! And thank you to Jenn for having me today!

Glad to have you Jae!

I enjoyed the interview; it was interesting.

I look forward in reading Mythic.

Thanks for stopping by Tracey & Abigail-Madison!