Today's Teaser is from White Vamprye, by Leon Steelgrave!

In the second month, the seventeenth day of the month, the same day were all the fountains of the deep broken up, and the windows of heaven were opened.  And the rain was upon the earth forty days and forty nights.  Genesis 7:11-12

Global warming has decimated the planet; and thirty years after the Great Flood the remnants of are crowded together in a vast conurbation that occupies the remaining high ground.  Old racial hatreds have re-emerged in the face of growing unemployment and civil unrest, and human vice remains unaltered. 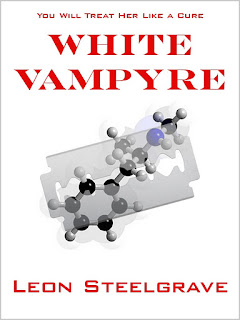 As spirals into anarchy, Detective Kurt Brecht finds himself forced to confront both the demons of his past and those of his present drug addiction.  Aided by the mysterious Lady Methedrine, he must defeat Isaac Vaughan, the head of the powerful Tessler Corporation, and thwart his ambition to seize control of the city.

White Vampyre will be published on Amazon and Smashwords December 12th.

Sajer drew up alongside the patrol car and lowered his window.  The uniformed officer nodded a greeting and quickly broke eye contact.  His knuckles showed white as he gripped the wheel, his attention fixed upon the dashboard.
‘You called in the ten-double zero?’
‘No, sir.  Falconer responded to an anonymous tip off.  He and his rookie are in the alley with the crew of the meat wagon.’
Sajer drove on and parked the cruiser on the sidewalk.  A cordon had been set up around the entrance to the alleyway, on the other side of which stood the usual rubberneckers and press parasites.  Sajer ignored the pointing video cams and ducked under the yellow incident tape.  He badged the uniform guarding the cordon and entered the alley.  Temporary spotlights silhouetted two paramedics as they secured a body to a backboard.  Another pair of uniform officers stood off to the side watching them work.  Sajer recognised the older uniform as Sammy Falconer, a fifteen year street veteran.  The boy next to him looked barely old enough to be out of school, surely a sign of his own advancing years.
Sajer took in the scene with a disciplined eye, noting the police issue automatic and com-unit lying next to the victim, the surrounding blood splatter black in the sodium glare.  The drawn weapon meant he had seen his attacker and either been too slow or otherwise dismissed the threat, the latter unlikely in a dead end alley.
One of the paramedics turned as Sajer’s shadow fell across him.  The movement gave him his first clear view of the victim’s face.  He recognised Brecht even through the oxygen mask.
‘What are his chances?’
‘About eighty-twenty against.  There’s an infected GSW to the right shoulder, plus your man took three shots to the gut – hollow points, judging by the tissue damage.  If he lives, he’ll probably spend the rest of his life shitting into a bag.’
The paramedic motioned Sajer aside and gestured to his colleague.  They lifted Brecht on to a gurney and wheeled him in the direction of the waiting ambulance.
Sajer squatted beside the pool of semi-congealed blood and lifted the com-unit.  He wiped the blood from its case with a handkerchief before slipping it into his overcoat pocket.  His knees cracked as he stood.  The wail of a siren marked the ambulance’s departure.  A one in five chance.  Not odds he would personally care to play.
Sajer addressed Falconer.  ‘I want the scene processed and scrubbed.  No press access.  No comment.  Keep this off grid.  Understood?’
‘What about the com-unit, sir?’ the rookie interrupted.  ‘Isn’t it evidence?  I mean you shouldn’t handle it like that.’
Sajer’s gaunt features turned pale.  ‘There are a couple of things you should learn if you intend to have a career in the Department, son.  First, never quote procedure to me.  Second,’ he looked at Falconer, ‘did you see a com-unit?’
‘No, sir.  Duvall must be working too hard - imagining things.  Y’know what these double shifts are like.’
‘Ah,’ Sajer sighed.  ‘Perhaps it’s time he had a rest?  Have him transferred to Records.’
‘Very good, sir.’
Falconer ran a finger around the edge of his grime-stained collar as he watched Sajer exit the alley.  ‘Bad move, Duvall.  You just couldn’t let go, could you?  Have you listened to a single word I’ve said over the past month?  Apart from Internal Affairs, Vice is the one other squad whose men you never question.  Sajer’s unit is an autonomous state all of its own.  When one of his people goes down everyone else with an ounce of smarts starts looking for a rock to hide under.’
Sajer polarised the cruiser windows, shutting out the glances of the curious.  He ran his fingers through his iron-grey hair before pulling the com-unit from his pocket.  Department issue, same as the pistol that he’d left in the alley.  Sajer keyed in his master code, a backdoor password held by each squad commander, and browsed through the file timestamps.  The most recent entry was less than two hours old.
21/12/85, 21:40: Lady Methedrine has made it clear that she’ll never relinquish her claim on me.  I’ve been running on luck for far too long now, but Slinky finally delivered the goods and I might just have a chance to get out from under before she plays her end-game.

Sajer slammed the door to his office, strode angrily to his desk and threw his coat across the back of his chair.  His emotions seethed as he tried to rationalise his actions.  Brecht was as good as dead and he might as well have pulled the trigger.  It didn’t matter how much he tried to dress up the truth or justify his actions, one fact remained the same; his was the hand that had authorised the sanction.
He slumped into his chair and stared at his hands, seeing, like Lady Macbeth, imaginary bloodstains that would never wash clean.  ‘So it was wrong!’ he shouted.  ‘But if I have a credo it is “never regret, never apologise”, and by God I am going to live by that.’  Voicing a defence against his self-doubt lent him strength and composure.  He retrieved Brecht’s com-unit from his coat and flipped open the case.  His finger hovered uncertainly over the touchscreen, but he had already come too far to shy away from the truth.  He navigated to the first of the journal entries and started to read.


Author Bio: Raised and educated in what he describes as a town of narrow streets and even narrower minds, Leon Steelgrave was afforded plenty of opportunity to hone his acerbic wit.  If he never looked back, he certainly spent a lot of time looking inward, a practice that has stood him in good stead.
At twenty-one he decided to try and earn a commission for writing one of a series of Judge Dredd novels then being published by Virgin Books.  The commission proved beyond his youthful reach but he did keep the rejection letters, their content being such to persuade him that he might one day become a professional writer.
While a career in electrical engineering provided the means to pay the mortgage, it was a youth spent reading seminal British comic 2000 AD and an involvement in the Goth scene of the late 1980’s that inspired the creation of Lady Methedrine and the setting of .  The early works of Michael Moorcock and Neil Gaiman also played their part in warping his young and impressionable mind, for which he remains indebted.
For those who may be interested: he prefers his music fast and loud, takes his coffee black, is partial to malt whisky and willing to discuss sponsorship deals with BrewDog and Harley Davidson.  Though not conjointly as driving under the influence is bad.
White Vampyre, his first work of fiction, was originally published as a Print On Demand paperback by Booklocker.com in the  in 2003.  Out of print for a number of years, a revised edition is now in preparation, along with two sequels.
The author currently resides with in Aberdeenshire with his record collection.  Plans are in progress to relocate to a walled compound in the .  You can assist by purchasing his books.
Posted by Jenn Nixon

Lovely stuff, very intriguing - thoroughly enjoyed that. Looking forward to the 12th when the book is out!

You should try to read https://bestparentalcontrolapps.com/best-apps-to-limit-screen-time/ if you want to get Apps to Limit Screen Time. It will help you for sure