Today's Teaser Tuesday is with Irene Peterson, Author of Dancin' in the Dark. 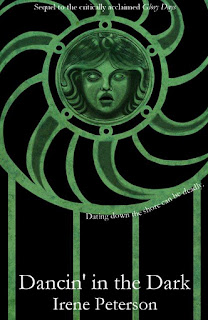 Carly is Bourbon John Preshin's newly found daughter. Only it's six years after Glory Days and Carly is all grown up. She's even been trusted to take over Preshin Investigations (in the office ONLY) while John and his wife Liz (the redhead with the knife) are in California to testify against her ex. Carly feels very sophisticated after her college graduation and trip to Europe...she thinks she can handle anything, even go out in the field.

Her first day on the job, she meets the scruffy new kitchen help from the restaurant downstairs and is not impressed. Sure, he's a wounded veteran just home from , but he rubs her the wrong way. Then she meets the gorgeous lawyer who wants to hire her father to locate some people. Of course, she can handle the job by herself...the guy is so cool and rich and seems to like her. Besides, she needs a date for her best friend's wedding and wouldn't he be perfect?

Excerpt:
Every time the double doors swished open, Carly sat upright. The nurses and pencil pushers ignored her. This went on for hours until Carly, curled up in the uncomfortable chair, dozed.
A hand on her shoulder woke her with a start...the heart-kicked-into-action, body-on-full-alert kind of start that caused heart attacks in older folks.
Carly straightened herself and tried to stand when she saw the unfamiliar face of Dennis, the kitchen help.
“You awake?” he asked, innocence and ennui in his tone that belied the concern in his eyes. He played with the keys, jingling then catching them in his left hand.
Despite the mixed signals, Carly cast him a sour look. She was crumpled, cramped, drained and he was acting as if his arrival should be the cause of great rejoicing. Celebration with whoops and hollers to say the least.
“What are you doing here?” she grumped.
His brow lifted and his whole body shrugged. “If that’s the way you’re going to be....” He left the threat unspoken.
Carly wiped at her eyes. “Forget it. I'm not in the mood to be polite. I'm waiting to hear if someone who means a great deal to me is going to live, not that it matters to you.”
Dennis folded his long body into one of the vaguely padded orange chairs next to hers. “Yeah, I know all that. Flo sent me to bring you home. She said it was late and the hospital was no place for you to be hanging around at night. Doesn’t seem to be any point in you lingering.”
At this, Carly snapped.
“No point? Only life or death of somebody who got shot about six inches away from me. Six inches, no more!” she indicated the distance with her spread fingers. “Yeah, I'm such a shit I’d just leave without finding out... finding....”
The tears gushed out of her, accompanied by anguished wails and her mashing her fists into her eyes in an attempt to stem the tide she’d held back for hours.
Dennis stared at her, his eyes wide in horror. Carly leaned over to him and clung to his shoulders while burying her face in his chest.
For a few seconds, he did nothing. She shook against him. He pursed his lips and raised his arms slowly... hesitating for too long before placing them around her. Gently. As if she were on fire.
Feeling his tentative touch, seeking some comfort, Carly turned her face to the side and just let him hold her. Hell, it was only Dennis, but right now, she needed to be held.
~*~
Around two, a doctor still wearing operating scrubs came out of the swishing doors and looked around. He turned, about to go back inside, when Carly jumped up and called out to him.
“Please,” her voice dropped to a whisper. “I'm waiting to hear about the priest. Is he going to be all right?”
The doctor frowned at her. “Are you a relative?”
Carly nodded. “I'm his niece.” It was easy to lie with her father’s permission.
Dennis joined her, standing with his hands behind his back but close. She could feel the heat from his body.
“He’s a lucky man. Very lucky. The bullet went through some of the thickest muscle of the human body and nicked his hipbone, but your uncle will be fine. Won’t be able to sit for awhile, though.”
Carly’s brain tried to grasp what the doctor was saying, but it didn’t seem to register. “There was so much blood,” she ventured.
The doctor nodded. “He was shot. Gunshot wounds make big holes in flesh. They bleed profusely, but in a way, that’s good. Nature’s way of cleaning the wound.”
That seemed a little offhand to Carly, a little callous, but as long as Fr. Mike would be okay, that was all that mattered.
The doctor nodded again and turned to leave.
Carly couldn’t make herself move.
Dennis thanked the doctor then took Carly by the arm and led her outside to Flo’s car.
“I don’t understand.”
Dennis started up the ancient Ford Tempo and eased it out of the parking lot. “What’s not to understand?”
Carly rested her head against the window. Her eyelids were so heavy she just closed them for a little bit. “There was so much blood. I thought he would die for sure. Maybe it was some kind of miracle.”
Dennis stomped on the brake, pitching Carly forward against the seatbelt. “Oh, for crissake, Carly. It wasn’t a miracle. He was shot in the gluteus maximus.”
“Huh?” Carly’s sleep-benumbed brain couldn’t grasp what Dennis was saying to her.
Easing up on the brake, Dennis steered onto the main road.
“He’ll live, Carly. In this day and age, very few people die from getting shot in the ass.”

Congrats on the release Irene!! Great having you back on the blog!
Jenn