The worst thing I’ve ever written would have to be my first-ever attempt at writing a novel. I began work on it as a child of 10-years-old. I had just seen the Disney film “The Black Cauldron” after badgering my parents into taking me to see it. I was lucky enough to be able to see it in theaters during its VERY short theatrical run. After watching the film, I was hooked on fantasy.

Being a writer is the only thing I ever wanted to do. So, at the age of 10, I started work on my first “novel”. As it turned out, I had NO idea what I was doing. Between half and three quarters of what I tried to do I didn’t know the words for or how to describe. Due to that, I ended up drawing most of the story and telling it through illustrations. Now, at 36, I don’t even remember what the title of that mess was. But it WAS a mess! I don’t think I ever even finished it. What I did write of it was a conglomeration of drawings and text—a badly-done illustrated novel.

That “project” taught me that an author can never stop learning and stop making themselves better. It taught me that, if you’re going to write something, you need to be prepared for what that entails—knowing your subject matter and being able to put it into words. I’m an avid reader. When I read, I’m not just reading, I’m studying and learning so that I can continue the progress of becoming better at what I do.

Writing is the only thing I’ve ever wanted to do for a living. Anyone who has known me for my entire life may well remember the time when I was 5- or 6-years-old and announced that I was going to go get a job at the local library. I wanted to work there because I wanted to work with books. When my parents pointed out to me that I was “a bit too young” to get a job there, my response was, “Fine! I’ll open my own library!” When asked where I planned to get the books, I firmly stated that I would write them myself. I then began stapling papers together to form pages and starting writing what amounted to short stories on them. Writing is the only thing I’ve ever wanted to do.

In 1993 I graduated high school. Luckily, I was able to partake in my school’s early graduation program and be freed from the horrors of high school after only half of my Senior year. Hating school with a burning passion, I leapt on that opportunity with both feet when it was offered to me! When my Senior Semester, as I refer to it, ended I started writing more. It was then that I started submitting work to magazines, trying to get published.

I’m very multi-genre, yes. As of January 2012, I have over 30 short stories and seven  novels published. I’ve been hired to write a comic book miniseries, website content and screenplays. A large chunk of that body of work, especially in the short story area, has been fantasy. Due to that, people used to label me as a “fantasy author”. More recently, most of my work has been in the horror genre since my fourth novel, “Predators or Prey?”, the first installment of my Wendy Markland series, was published by Dark Castle Lords Publications.

“Predators or Prey?” has sparked a lot of interest. Within two weeks of the books initial e-book release, I was contacted by someone who wanted to turn the book into a film. Sadly, that’s since fallen through after that project morphed from a film into a TV series. But, there is continued interest from other parties in turning “Predators or Prey?” into a movie. Actually, at the moment, two of those parties are trying to pull together a $3 million budget for the making of the film. There is also a comic book series in the works—written and lettered by me—called “Wendy Markland: Chronicles Nocturnum”. The first story arc of that series will be a comic book adaptation of “Predators or Prey?”.

Due to the response I’m getting from my horror work, I’m continuing to explore that genre. Still, despite working in horror, action/adventure, science fiction and doing some non-fiction work in the form of website content, my first literature love is fantasy. I actually have an idea for a new fantasy project that’s been bouncing around in my mind for some time now that I really, really want to write. But, to do what I have in mind, it’s going to have to be big—a series of lengthy novels, an on-going comic book series or a TV series. Anything smaller wouldn’t match the scale of what I have in mind for this and would force me to leave out huge chunks of the story.

As for whether or not they’re the same genre, that happens sometimes as pure coincidence. At the moment, I’m working on my forthcoming novel. It’s an action/adventure called “”. It’s set in the jungles of ’s peninsula and is the longest thing I’ve written to date. It’s undergoing editing at the moment. I’m also working on Issue #1 of “Wendy Markland: Chronicles Nocturnum”. The Issue #1 script is written, but I’m coordinating with the producer who’s picked the project up and the artist to get Issue #1 complete. Anyway, throughout this, I’d actually been going back and rereading my collection of “Doctor Who” novels. For Christmas, I was given the first three books in Jim Butcher’s series “The Codex Alera”. So, I’ve put the “Doctor Who” books aside for the moment and just finished the second of those three fantasy novels. I tend to be very eclectic, if you’ve not guessed that already!

For me, really, the most difficult part is finding funding for the TV/film projects I’m involved with. Take “MoonWraith” for example. “MoonWraith” is a character-driven action/horror series set in medieval against the backdrop of a war between humans and werewolves. The on-going conflict between the two sides isn’t the basis for the series; it’s really the excuse for it. The stories I have planned revolve around the characters on both sides of the conflict. At present, I have a list of 42 people who want to be involved in the pilot episode as cast or crew. A couple of those are fairly well-known names. Yet I’ve been unable to find anyone to produce/distribute the pilot.

TV/film aside, and speaking strictly as a novelist, the queries tend to be the most difficult part of the process for me.

I would have to opt for Jim Butcher on this one. Mr. Butcher has had a string of over a dozen New York Times Bestsellers in a row with his “Dresden Files” series—of which I’m a huge fan, by the way—in addition to his “Codex Alera” series and other work. “The Dresden Files” was even translated into a short-lived TV series. Sadly, the producers opted for a lot of changes between the books and the TV series and it didn’t survive that mauling. Mr. Butcher has also written original comic book projects. For me, being able to mimic the career that Jim Butcher has as an author would be a dream come true. Just being able to meet Mr. Butcher and sit and talk with him would be a dream come true! 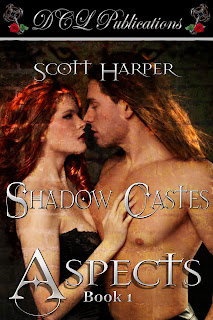 Felix Hollerman is a werewolf, struggling with what he unexpectedly became nearly two years ago. The stress and pressure of dealing with his lycanthropy has pushed him to the edge. When Nephele Kolb arrives unexpectedly, also claiming to be a lycanthrope and offering to help Felix change his life, he is shocked and thrilled. However, when his training under her tutelage blossoms into romance and a werewolf hunter and a rival pack arrive in the area, Felix’s life becomes a lot more complicated.

Meanwhile, superstar author and psychic vampire Eugen Zahn is finding his own life made more complex and dangerous by another of his own kind as well as a new reporter with a grudge. Events in Eugen’s life, unbeknownst to him, are putting him on a collision course with Felix Hollerman and the mess his own life has become.

Author Bio: Scott Harper is the author of more than 30 published short stories and several novels. There has been talk, from several fronts, about turning his fourth novel, "Predators or Prey?", the first book in his Wendy Markland series, into a live-action project.

Harper graduated from in 1993 and began screenwriting in 2007, after the publication of several short stories and novels, and has worked on projects for James Tucker Productions and 11th Dimension Films. He is currently involved with several projects, covering literature, film and comic books.

Love the interview and the fact you read Doctor Who!! I haven't tried yet, probably should.

Thanks for participating!!
Jenn

Love the interview, Scott! I too started writing as a child - and never wanted to be anything else. I joke(but it's only half a joke) that I became a writer because I never figured out what I wanted to be when I grew up.
I'm also a Dr.Who fan! So hello from a "fellow" Whovian!

Wonderful interview. I just discovered this new author. Love his imagination. I was writing at the same age!
AKA: Bonnie Lea from The PRG.