Teaser Tuesday with ME!

Here's a little tease from Trust Me, Tell Me, the last novella in the "Storm Series".

A week before Mason and Veronica's wedding, his past comes back to bite him in the ass, big time. 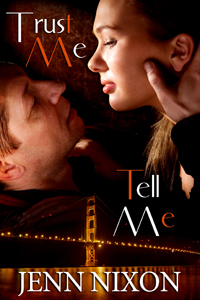 “I have to go back.”
“Back? To ?” she asked, he nodded. The look in his eyes said the rest. She knew exactly what this was about, her stomach twisted. Storm’s big regret. The one thing that still haunted him and occasionally gave him nightmares. Something important enough for him to leave without a word. “What happened?” Storm frowned. That meant he wasn’t answering the question, so she took a different approach. “How long will you be gone?”
“Don’t know. We’ll work as fast as we can.”
“Chuck?” she surmised, confirmed by his slight wince. “He sent the Code Blue?”
Storm nodded.
“How can you be sure you can trust him with this? And for that matter, why can’t you tell me, it’s not like we haven’t talked about it before.”
“He was my superior and former partner…he knows the details, and if I tell you more now you’ll just become a target too.”
“Target?”
“Fuck,” he spat and covered his face. “Stop asking me questions, Veronica. I’m begging you.”
Conflicted, but determined to get through to him, she approached, ran her fingers through his hair and waited for him to look up. He didn’t meet her eyes so she tipped his chin. “Tell me.”
“The stolen evidence that I was charged with taking? It was taken by this cop, Todd Jackson. He was ready to turn himself in…clear my name just like that and wham! Dead.”
“Oh, God.” She stepped back, watched Storm’s face harden, felt shudders climb up her spine. Way more serious than she imagined. After surviving a kidnapping—or three, she thought she had nerves of steel. Not quite. She’d be a fool not to fear someone slick enough to manipulate then take out a dirty cop and make Storm run for the hills.
“Do you remember Ben Carter?” he asked. She numbly nodded. “He brought the information to Chuck and now he’s lying in Mercy General, unconscious. Chuck and I have to go off the radar for a little while, sort things out.”
Veronica shut her eyes, turned away, trying to sift through the thoughts and theories and ideas swarming her mind. She should have listened to him from the start. Now that she knew the reasons, it’d be impossible to let him jump back into the fire, with an even bigger target on his back, and go it alone. “Let me help.”
“You can’t.”
“Yes, I can.” She spun, moved to his side.
Storm rose to his feet, glared down, dead serious. “No way, sweetheart. Go home. I’ll buy a pre-paid and call you when I can.”
“Going to with Chuck?”
“Fucking Hank, right?” Storm stomped to the opposite side of the room, fists balled at his side. She felt slightly guilty pulling his strings but he’d been there for her when it mattered most, there was no way she’d walk away. “What else do you know?”
“Not enough to help, but you can change that.”
He rushed to her, grabbed her by the arms and backed her into the dresser. “People have died, Veronica!”
“And I don’t want you on that list!” She fisted his shirt in her fingers and jerked him closer.
“I can take care of myself—” He barricaded her, his body tensing to stone.
“Yeah, likewise. Next argument?”
“I don’t need your help.”
“Lie.”
“Then I don’t fucking want it.”
“Ha! Bigger lie.”
“Stop, Veronica.”
“No.”
His eyes narrowed. “Why are you doing this?”
“Because I love you.”

Purchase at: AMAZON  or B&N
Posted by Jenn Nixon

Fantastic excerpt. Your dialogue is really good and the tension is great!