What's in a name?

Well, I hope you know my name. Would be kinda weird if you didn't considering it's all over the blog...

First, let's address the Jennifer part. While I love my mother to pieces, she didn't do me any favors naming me Jennifer.

With the middle name of Lynn.

It was the most popular name of the year and a few before and after too. I know this to be a fact because I went to school with a bunch of Jennifers. (The main reason why I changed from boring Jen to cool awesome Jenn in 9th grade. LOL) To make things even weirder, my mother is Pat. You can image the conversations she had!

Anyway, it wasn't until I started school that I realized I had a famous last name. Sure, if everyone looks deep enough I'm sure they can find a famous person with the same last name, possibly the same whole name, but in the late 70's early 80's Nixon was still on everyone's mind. You see, he was a President. He had some issues, and well, what better way to find out more about it than to ask some 6 year old kid if they are related to the President?

I had no idea who Richard Nixon really was until probably 10 years old. To be honest, I didn't care. I gave everyone the same response that was given to me. "Not sure, we might be related."

In my mid teens, you know that time in your life when you lie about everything, well,  I told some people that I was related to Richard Nixon way down the line on a cousin side. In all honesty, it still may be true, but I just did it to feel special, or maybe to impress people if they seemed like they were a fan of Nixon back then. 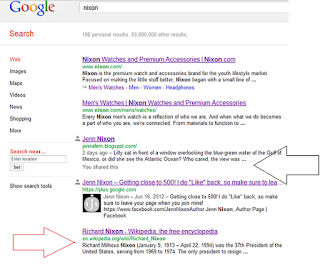 As a telemarketer, I used my last name often to get people's attention. It totally worked. All I needed was a moment of conversation and by the end, I sold you some damn newspapers.

After a while, it got annoying answering all the "Are you related?" questions, luckily, it mostly stopped after Richard Nixon passed away in 1994.

And you want to know another weird thing? I NEVER had to spell my name to anyone before say, 1997. I'd say Nixon, like the president, and everyone would know. But then as the 2000's crept closer and all the younger kids started working at stores and supermarkets, I actually had to start spelling my name. One chick actually spelled my name Nickson. I mean, I get it, but really? I've never seen that name before. LOL

I sometimes wish he was still alive because then people would be searching him on google more and find me because guess what? I'm ABOVE him on the search listing!  HAHAHA, GO ME NIXON!

I like being Jenn Nixon now. I'm  used to after 38 years. I've decided I'm going to keep it.


How about you? Love your name, hate it? Tell me!

I agree. You are who you are. But at least your name isn't something incredibly embarrasing or terrible!