Today's Teaser is from Berinn Rae, author of Stealing Fate.

Stealing Fate is a 20,000-word e-novella (about 100 pages) in the Unspun anthology that sheds light on the Fates, ancient goddesses who played a role in many Greek myths. Each novella in the anthology is being released as a standalone e-novella first. Stealing Fate will be available as an ebook everywhere July 24. 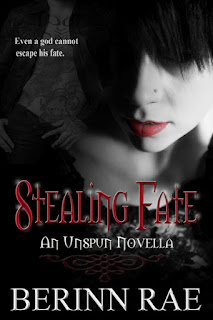 She stole his fate…
Lachesis is a Fate, an ancient goddess in whose hands our destinies are unraveled. When she’s not weaving fortune, she does what she wants when she wants. That all changes when she runs into the man she craves but prayed to never see again. And she'll soon discover the god of terror can really hold a grudge.

Now it’s his turn…
The most frightening of gods, Phobos is a predator who takes pleasure in terrorizing the world. After millennia of relentless searching, he finds the Fate who caused him to be cast down from Olympus. Now he plans to use every bit of his talents on the goddess to regain his lost heritage without losing his heart in the process.

With the slightest tug of a smile, Phobos closed his eyes and imagined the ground quaking and streamers of fires bellowing down from the ceiling. What he envisioned, the mortals’ minds made real. It took no more than a mental nudge to mislead the weak. Thunder shook the building, and plaster pelted them like hail. Screams erupted. The herd trampled one another in attempts to flee the horror of their own minds’ creation. He could feel their hearts leaping in fear. It exhilarated him.
None were more skilled than Phobos in driving fear into even the most courageous of warriors. He could drive cities mad with horror. The right mind fuck could end a war before a drop of blood was shed. Except the god of terror delighted in bloodshed. And one particular Fate’s blood begged to be spilled.
Phobos charged into the night, his speed increasing past each block, knowing he would quickly catch up to his prey. Lachesis.
She wasn’t far now. Excitement welled as he drew closer to the woman who deprived him of glory. For the centuries he’d been doomed to this realm, Fate tortured his thoughts.
It took him nearly an hour before he spied his prey. She’d wisely moved to the grittier side of town, where the population grew sparse when the sun set. More places to hide, older scents. She’d thought herself clever, but Phobos was no ordinary tracker.
The filth and noise made it easier for Phobos to close the distance between them. Every few seconds, Lacey glanced over her shoulder before continuing her doomed escape. Was that a look of anticipation? No more than a dozen feet away now, his heart thrummed.
Using his ability to blend into the bricks, he stepped into the alley. Lacey leapt onto a caged ladder, froze, and then dropped to the ground. Coming to her feet, her eyes darted around the alley, looking for something. He drew close enough now that, even without battle-honed senses, she could likely sense him.
He mentally projected a sea of bats raining down into the alley.
Lacey inhaled sharply. Then she did what he never expected. One corner of her mouth tugged her lips into a sensual smile. Her eyes narrowed. Did he sense exhilaration?
“Come out, come out, wherever you are,” she taunted in a sing-song voice, oblivious to the swarm around her.
Frowning, he melted the bats into the blackness. Taking his time, he drew closer, dropping the illusion only after he came to stand behind her.
“Caught you,” he whispered into her ear from behind.
She shivered, tensed, and turned around. Slowly. Seductively.
He raked his gaze over her body. So close. He fought back the urge to pull her to him, to inhale her, to taste her. Instead, he stood firm, prepared to take her down at the slightest hint of aggression. He couldn’t afford carelessness. “Your escape will not be so easy this time.”
She lifted her brows. “Who says anything about escape? Maybe I wanted you to find me.”
He narrowed his eyes. “Do you crave death, woman?”
“No. I like living very much. What I crave is you. Every inch. Every delicious scar.” She traced a line across a scar on his neck he’d acquired from an axe that nearly decapitated him.
He gripped her hand, angry that she pointed out his imperfections. “Liar.”
“Give up the self-loathing thing, Phobos. You’re scrumptiously sexy. Deal with it.” With that, she grabbed his neck and tugged him down closer. Stronger than her, he permitted the small movement. Until she stared at his lips.
She wouldn’t dare.
She dared. 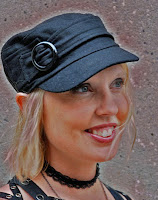 Thanks so much for stopping by!! LOVE that cover!