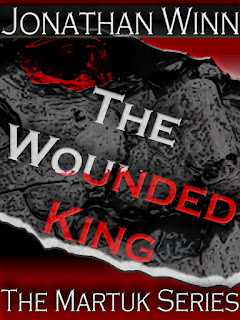 A sacrifice.  A dying King.  Bones in the stone, blood in the wine.  A Queen consumed by the Darkness.
From ancient Uruk, The Almost King tells his tale.  Of The Elder and his cunning Priests in their robes of red and gold.  Of an Old Woman who can call the power of the Dark Gods.  Of his mother, the Queen, and his dying brother, the King.
And of the Darkness, an evil from before the Time of the Moon.  Inescapable, its hunger never-ending, its shadow fed by the Priests, slowly overwhelming his family.
Drowning in a sea of red and gold, the Almost King battles an unwinnable war as he navigates the wreckage towards his fate as … The Wounded King.
***
The Wounded King is the first in The Martuk Series, a collection of Short Fiction based on characters from the full-length novel Martuk … The Holy.

Excerpt:
In the silence of the , they spoke.
A murmur, a sigh, an awakening, a cry.
Mother …
Father …
King …
I moved my cheek from the stone, the pain of the whispers too great to bear.
Although night, the workers -- slaves, prisoners of war, many of them mere boys -- still pulled and pushed the immense blocks into place, the already overwhelming Temple forever expanding, a veritable mountain of stone overlooking the city.
For many of them, this was all they knew, their lives after capture, after defeat, one of constant work, nonexistent sleep, and death, quick and inevitable.
Above them all, the Priests watched.
And here, under the light of an almost full moon, the pain, the rage, the powerless despair of all those trapped and troubled bones in the stone surrounded me like a fog.
In the quiet, safe in the dark, far from those who watched and those who worked, I pressed myself to the cool rock.
I would listen.
Cry …
Whimper …
Sob …
Yes, I feel you.
Wound …
Suffer …
Die …
I pulled away.
Die …
King …
Die …
“They know you.”
I turned.
A small woman stood behind me, her long hair as silver as the light bathing her, the years in her face softened by the glow of the moon.
I glanced around for my guards before remembering I had left them hours ago, ordering them away before climbing the hill to the .
“Your guilt needed solitude,” she said.  “Your shame too great to share, yes?”
She waited.
I nodded.
Yes.
“And this is why you, the Almost King, stand here now, at this hour, under the moon, listening.”
She stepped closer.
Though draped in woolen, the rough fabric scarred by clumsily mended rips and tears, her feet bare, her wiry frame alarmingly thin, she carried herself with an unapologetic sense of majesty and dignity and strength as she moved near.
“Is your power worth all that death?” she asked.
“No,” I said, the answer quick and unthinking.  “No.”
“And yet it is not something you can deny, this power.  This crown.  It will be yours regardless of what you want or what you do.  Or what I do.  Born into this, you are as trapped as those in the stone.”
The tears threatened to come.  I blinked.  And blinked again.
“The most powerful of men,” she continued gently, “utterly powerless to change what must be changed.”
Watching me, she grew silent as if she, too, were listening.
She turned her head, her gaze settling on the workers in the distance, the sweat on their skin shining under the glow of torchlight.
“Your mother is one with the Dark Gods, yes?” she asked.
I hesitated.
“There’s no need to answer,” she then said.  “It’s commonly known, understood.  We barbarians, as she calls us, here in the city talk of her and the Priests and their ancient religion.  Those beliefs from the Time of the Moon.  Of their worshipping those who must be paid in blood, in flesh, in fear.  In the tears and cries of those they slaughter.”
“This is known?”
Looking at me, she continued.
“It is also known, and spoken of, that once these souls are bled and lifeless and useless, they burn --”
“Stop.  Please.”
She stopped.
It was my turn to watch the muscles straining as the strangers pulled and pushed, braided rope splitting and shredding .
“The gift you must give,” she said, echoing my mother.
“Is something I regret,” I quickly said.  “Something I wish I didn’t have to do.  Something I wish I had never done.”
“But it’s done.”
I looked at her.
“She’s a very powerful woman, your mother,” she continued.  “Not many can deny her.  Not many dare.  Those who do .... ”
Growing quiet, she left the thought unfinished.
“And the Priests?” I asked.  “What of them?  Do the people talk about the Priests?”
“Yes, they do.  And they understand what you and your mother do not:  the Priests are more powerful than you know.”
“She believes she’s a God.”
“An easy lie for them to feed her,” she answered.  “And her mind …”
Hesitating, she looked for the words.
“Her mind is wounded and hungry.  Desperate for comfort, the grief, the guilt, the horror at what she’s done still at war with the delusion of her immortality.”
“She struggles,” I agreed.
“And eats.”
Confused, I looked at her, her eyes almost silver under the light of the moon.
“The bones are in the stones, yes?” she asked.
I waited.
“And what of the flesh?  The flesh you burn before they grind these bones?”
She stopped, watching me before asking again.
“What of the flesh?”

Author Bio: Screenwriter, playwright, and author of Martuk … The Holy, Jonathan Winn was born in Seattle, but raised two hours south in a very small town in Western Washington State. After graduating high school and living in Los Angeles for the better part of a decade, and desperate for four seasons instead of constant sun, he moved to New York City where he happily lived in Greenwich Village with his two dogs.  But after almost twenty years, the pull of family led him back to the Northwest where he now lives once again.  Happily.

Like most writers, every word Jonathan writes is accompanied by endless cups of coffee with lots of milk and sugar (the ratio changing depending on whether he slept five hours or six hours the night before).  He's also regarded as politely relentless by his friends, unbearably annoying by his enemies, and recently discovered he makes a mean fried chicken, often used to placate those aforementioned annoyed ones.

The Wounded King is his second book, the first in an ongoing collection of Short Fiction called The Martuk Series.

Great excerpt! Thanks so much for guest blogging!