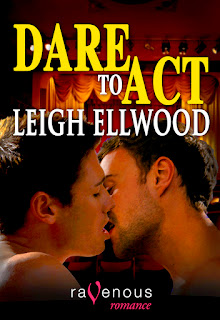 When actor Parker Stigwood stuns the world by doing the unthinkable on live television, he’s convinced his career is over. Disgusted by Hollywood hypocrisy, he pushes the pause button on his life and retreats to his parents’ home in Dareville to contemplate his future. Little does he realize, various forces have plans for him on a personal and professional level.


Luke Hall is excited to direct his first play for the local arts center, more so when the handsome movie star volunteers to watch rehearsals and offer pointers. Luke would rather watch Parker, but there are interruptions to his viewing pleasure. When a well-meaning friend seeking benefits places doubts in Luke’s head about Parker’s intentions, Luke wonders if their relationship will bomb at the box office.

On and off-stage, Luke and Parker’s passion sizzles. But will Parker dare to act on his feelings for Luke and leave his star behind for good?

Excerpt
“I wanted to tell you how much I enjoyed the rehearsal. You have a great ensemble there, and I liked how the script and the action flowed.” Parker sipped his coffee. “If I had to offer anything constructive, just based on what I saw, I think maybe your Titania could slow things down a bit. There were parts where it sounded rushed, and she slurred her words. Even if you’re going to use the original Shakespeare with the contemporary sets, people still need to understand what everybody is saying.”
“I don’t disagree with you there. Janie’s audition was practically flawless, too, but lately it appears that she’s somewhere else during rehearsal. Mentally, that is,” Luke said.
“Gotcha. I thought my presence might have distracted her, but you’re saying this isn’t an isolated incident.”
Luke shook his head. He wished he could attribute the rehearsal gaffes to Parker’s presence—Lord knew he had trouble concentrating on anything besides Parker’s smile and long legs stretched out as he reclined—but he knew he needed to deal with Janie soon.
“Anything else you liked or disliked?” he asked. “We have a full dress rehearsal in a few days, beginning to end. If you’re not busy, you’re welcome to sit in.” His crew would think him insane for making the suggestion, considering how he didn’t let even his mother linger in the auditorium after delivering his lunch. Eventually the play would open to a live audience, even if the prospect of someone witnessing the rough product unnerved Luke.
If Parker proved the lone exception, it was because Luke liked having the man near, and sitting close to him like this was nearly ideal.
Parker nodded, as though pondering the invitation. “I suppose I should get a rental car tomorrow if I’m going to be out and about while I’m here,” he said. “My parents have given me use of their cars, but I don’t like holding them up, even though they insist I don’t go to any extravagant lengths to make things more convenient for them.”
Luke laughed. “They actually said that? Man, if I were raking in millions, my mother would be shopping for vacation homes in the Bahamas. For herself.”
“They let me go wild at Christmas, but that’s about it. I wouldn’t say I’m raking in millions, not like DiCaprio or Tom Cruise, but I do well.” Parker wrapped his hands around his mug and studied the contents. “They spent their lives together not having much, forever wondering about the next paycheck, so they feel it’s wiser to keep the money in the bank. You know, after I signed my first film contract, instead of popping open some champagne, I got a lecture about investing wisely.” Parker raised his eyebrows, looking quite comical as he spoke. “Because the movie could flop, and then where would I be?”
Luke laughed again, shaking his head. He knew Parker’s filmography. The man had yet to star in a bomb.
“The more I think about it, they had a point,” Parker continued. “I don’t have an agent right now, and I don’t know if she’s taking calls or blowing people off. When people do realize I have no representation, would they call me directly?”
“That sounds typical given the circumstances, but are you really worried about not getting offers?”
“Maybe.” Parker smiled. “I’m not hurting for money, but I like to work. I thought this signaled a change in my career path, but I realize I’m not ready to retire. I suppose I could try for more indie projects.”
“There’s always the stage,” Luke said.
“Yes. I’m going to need new representation anyway. I should shoot up to New York for a weekend and scout some prospects.” After a brief silence, Parker held up his mug. “Refill?”
Luke curled a hand over the rim of his mug. “I’m good, thanks. It has kick—either that or I’m failing at holding my liquor tonight.”
“I know I am. Whoa.” Parker stood and wobbled, but quickly corrected himself and moved to set his mug on a shelf inside the garage. “I should throw in the towel as well.”
“Okay.” Luke carried his mug over to Parker. “Well, thanks for having me over. Hopefully we’ll see you—”
The rest of his sentence was muted, thanks to the kiss Parker planted on his lips. He held Luke’s face close and stroked his cheeks with his thumbs. Luke shuffled into a more comfortable posture and wrapped his arms around Parker’s waist. He tasted whiskey and cream and moaned appreciatively when his host pulled him tight.
Their bodies joined, Luke closed his eyes and focused on the hands that stroked his back and slid down his spine to cup his ass. Hard muscle brushed against his groin, stirring his cock in his jeans. Luke wondered when Parker decided that this was a good idea, but knew better to question good fortune.
Gripping Parker at the waist, he broke off the kiss and took in a deep breath. “Your parents,” he began.
“Go to bed early, and even if they decided to stay up late they wouldn’t be coming out here,” Parker finished for him. “Like you intimated earlier today, our mothers hatched a plan, and my folks knew I asked you to stop by. There’s no way in hell they’re going to butt in and break this up.”
Parker twined his fingers with Luke’s and beckoned him to follow. They walked around the garage, along the landscaped exterior of the house. “Let me show you something,” Parker said.
Buy Now:
http://ravenousromance.com/modern-love/dare-to-act.php

Congrats on your new release! Thanks for sharing with us.

Thanks for having me today!