I began writing some twenty-five years ago, only because there weren’t many heroines around, in books or movies, which lead me to create my own – Detective Billie McCoy. I wrote a series of stories, all based around Billie and a few of my other main characters. My writing was strictly a hobby, one I enjoyed immensely. I never had any intention of publishing my stories and actually put them away for a few years. When computers became popular, or should I say affordable, I dug out my notes and began editing them in more detail. My daughter got hold of Slave Trader after I printed it out. She loved it and convinced me to publish it.
Do you read other author’s books when you’re writing? If so, do you read the same genre or something different?

I do read, but not as much as I’d like to. It takes me a while to get through a book, only because I find it hard to squeeze it in between my day job, writing, family, my music and other things that seem to pop up. I even work in a school library and still don’t get much time to read. I have to say though, since being published with Wild Child Publishing, I’m enjoying reading what my fellow authors are writing. Some of the genres are quite different to what I’d usually read but I’m finding them fun and entertaining. With the growing number of ebooks available, this new technology makes it much easier to search and find genres to suit.

I would probably say hitting the delete button during editing is the most difficult task for me – but it is getting easier. It’s probably because I wrote Slave Trader so many years ago, having been over it many times, I knew it as I originally wrote it. So, when my publisher asked me to adjust scenes, take out scenes and rewrite new ones, I definitely found it hard to hit that little DEL button. But, times have changed and so have writing styles since I first put pen to paper. Biting the bullet, I lay trust in my publisher and went with her ideas and guidance.

J. K. Rowling. She is such a genuine person who doesn't seem affected by fame and fortune. She has given pleasure to so many readers, both young and old. To have fans lined up to buy my book would be such a buzz, and then to see it hit the big screen would top it off.

Bio:   Carol lives on a small property in Queensland, Australia. She works in a local primary school as a School Officer / Librarian / Community Development Officer. Born in Childers, she grew up on a cane farm. Carol has been married for twenty-six years and has three children, two girls and a boy. She has traveled extensively throughout the world, visiting the US, Canada, UK, Europe, China, Japan, Thailand, Bali, New Zealand and of course, Australia. Her other passion is music. She plays bass guitar in a country rock band with her husband and two other guys, and is also a member of a symphony orchestra. With over fifty members, the orchestra is voluntary and visits retirement villages and small towns. 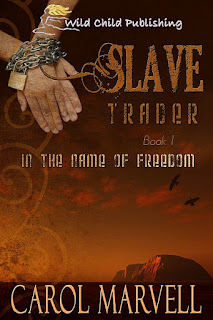 Slave Trader – In the Name of Freedom is Carol’s first novel. The action/adventure story follows Detective Billie McCoy in her fight for freedom after she is caught up in a modern day slavery trade run by a corrupt cop. The sequel, Providence Road – In the Name of Friendship is coming soon from Wild Child Publishing.

For the past three years, young prostitutes and destitute women have been vanishing without trace. Their fates unknown, the only common links to their disappearances are their good looks and prison records.

Never before has a cop been taken.

Detective Billie McCoy, a member of an elite undercover squad, is on assignment when she stumbles onto a slavery racket that goes deeper than she could ever have imagined. Plunged into a web of corruption and evil, not only does she have to contend with the slave traders, but her fellow prisoners – all who hate cops.

Stretching from the streets of Sydney to the rainforests in far north Queensland, it’s a race against time. Filled with determination, disappointment and twists, the story follows Billie’s fight for freedom and her greatest ever challenge. She will need all her cunning and skill to get out alive and see justice done.

Blood will be spilt, hopes will be destroyed – all to uncover a plot so unpredictable that only fate can decide . . . .

Great interview, thanks so much for participating!

It's a pleasure to be here. Thanks for having me.

This was a huge discover https://resume-chief.com/blog/engineering-cover-letter when I need to write a cover letter.