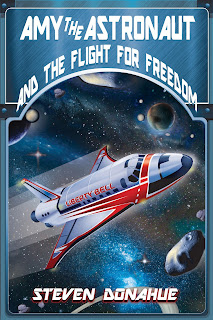 Blurb:  Twelve-year-old Amy Sutter steals the experimental spacecraft Liberty Bell to rescue her father and his colleagues from alien captors called the Crownaxians. She is pursued by Lt. Yale Brown, the officer in charge of the ship’s security, who has orders to bring back the Liberty Bell at any cost.


stood up and grabbed the briefcase. “I wonder what their children say about humans,” it said. The robot extended a hand and helped Amy stand up. The cold, metal surface of the robot’s hand made her shiver. She quickly let go and led the instructor to the door. Amy exited first and followed her through the living room to the front door. Clayton walked over from the kitchen and thanked before the robot left.

Author Bio: Steven Donahue was a copywriter for TV Guide magazine for 14 years. His first novel, Amanda Rio, was published in 2004. It has received critical acclaim from reviewers for Amazon.com and thebestreviews.com. Steven currently resides in Bucks County, PA with his wife, Dawn. He has two novels coming out in 2013: The Manila Strangler (Rainstorm Press) and Amy the Astronaut and the Flight for Freedom (Hydra Publications).