The Doctor and River Song have totally ruined Time Travel for me. To me, there will never be a more awesome, tragic, or mind-boggling time travel love story than theirs.

I have a theory that she's central to the 50th Anniversary Special and the Christmas Special because there a so many clues within her story line that it's possible despite rumors she won't be there.

First, I should say: SPOILERS!!!

My theory? River is still going to kill The Doctor 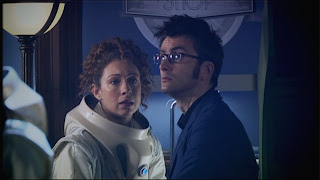 In Silence in the Library our first clue should be the fact that the name of the big bad enemy for the 11th Doctor is...omg the Silence. Episode title coincidence? Probably not. It is also the first time we and The Doctor meet River, but I think, not the first time River meets 10. She didn't act surprised at seeing 10's face. She didn't freak out when he didn't recognize her either. When she whips out her diary, she asks if they'd done the Byzantium yet. Why would she ask 10 that if 11 was the one who was there? Because I think she meets 10 again, sometime between The Big Bang and Silence in the Library (yes, I'm going backward episode wise, but forward, River-wise, confused yet?) and she isn't sure where 10 is in relation to the Byzantium/50th Episode because 10 and 11 are obviously crossing their timelines (which they're not "supposed" to do).

In A Good Man Goes to War, when River is breaking back into prison, she sees Rory. Did you notice her voice and the look on her face when she sees him? Now there are two explanations for this. 1. This is an older River than the one who shows up at Demons Run at the end of the episode and to her, at this point, her parents are dead and gone. Wait! You say. What about Angels Take Manhattan? In that episode, River tells The Doctor she's not in prison because she killed a man who didn't exist. Agreed? Well, the only reason that happened was because of Oswin, which didn't actually happen until Clara stepped into the Time Scar, thus creating those changes. (Timey Wimey) Or 2. She's just really happy to see him because it's the first time she's seen him since they locked her up in jail after she regenerated from Mels into River. Her appearances in Let's Kill Hitler and Wedding of River Song, she's the younger version.

Anyway...in that scene with Rory, she says that The Doctor took her out for her birthday. Rory has a message from The Doctor, too. From a different time, River says. Unless there are two of them, said Rory. "That's a whole other birthday," replies River. Now some may argue that this references the Mini-sodes, First Night, Last Night. I do not think so. I think she's talking about The 50th Anniversary Episode.

In Wedding, we see the young River, not shooting The Doctor and altering time. Once again, she's surrounded by the Silence, and even Madam Kovarian is there, still trying to kill The Doctor. In the alter-time, The Doctor does NOT tell River his name. At the end of this episode, we learn the question that must never be answered, which is hidden in plain sight is: "Doctor Who?" Which has a whole Academy and an order of the Silence Movement trying to stop it. So why can't the question be answered? No clue, but I'm sure it has something to do with the John Hurt Doctor we'll be seeing in the 50th.

Now River goes to jail, spending her days there, and her nights with The Doctor. This explains the little things like Jim the Fish, Easter Island, etc. She goes through her life, ending in the Library where 10 saves her data ghost in the computer core where, apparently, she's been conversing the Vastra.

In The Name of The Doctor, River freaks out when she hears about Trenzalore. Since this version of River is already dead and gone, why would she try so hard to stop him from going there? I think River knew The Doctor's "grave" was on Trenzalore because that's where she kills 11. Each time she killed The Doctor (Hitler/Wedding) her memories are fuzzy. In Angels Take Manhattan she said that she apparently killed a man who doesn't exist,  hence she is out of jail. But why wouldn't the Silence still be watching River? They projected a signal into the TARDIS with Amy's ganger, would they really let River go so easily if The Doctor is still alive?  Also, she probably learns his name here the first time, because she's going to need it in her personal future for when she actually gets to Trenzalore the second time as a data ghost hijacker.

We all know it's the same TARDIS on Trenzalore (as of right now), the window has a crack. (A time crack? lol ok maybe not) We all know that Matt Smith is leaving. We all know there are a bunch of questions left hanging, like how did the Silence blow up the TARDIS in The Big Bang. Moffat may not be as slick a writer as RTD when it comes to sneaky hits, connected stories, and whatnot, but I have a feeling he knew his 11th Doctor story was going to be all about River and The Doctor. Whether he planned Amy to be River's mother from the get go, I'm not sure, but once he decided to do that, he created an amazing story that can only be appreciated if you watch it all the way through...a couple times. :-)

Besides, how awesome would it be to see River be surprised at meeting 10 for the first time. They had great chemistry too, I want to see them interact again!

Did I confuse you enough? What do you think about the River story line?

I'll have another post this weekend on my picks for the new Doctor being announced on BBC America at 2PM SUNDAY!!! Hope you're watching!
Posted by Jenn Nixon